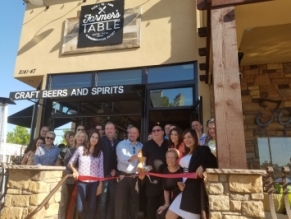 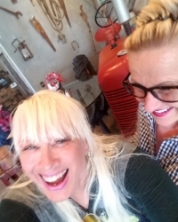 The biggest attraction is La Mesa’s restored historic downtown village, with a  thriving restaurant row that now attracts visitors from far and wide, plus several happening night spots. Additional great eateries are scattered through the city with the motto "jewel of the hills." 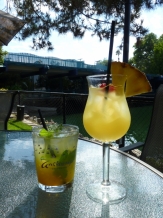 The name La Mesa is Spanish for  a flat-topped hill. The city has been likened in the past to the fictional Mayberry of TV fame for its quaint small-town charm, but it’s getting a younger vibe now, too.

There’s no hotel downtown, however a short ride away there’s a  Holiday Inn in La Mesa (photo, left) with rooms and suites fully appointed with features such as a fitness center, pool, wife, and an onsite grill and lounge.

Beyond, within a block of the hotel there’s Anthony’s Fish Grotto (photo, right), a popular seafood restaurant with  an outdoor patio by a duckpond; the menu ranges from fresh seafood catch of the day to ever-popular crab sandwiches with melted 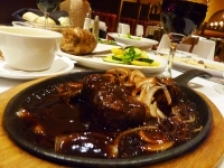 Next door to the hotel is Charcoal House, where you can find dishes ranging from filet mignon in cognac sauce (photo, left), lamb chops and some Mediterranean salads such as Fattoush and Tabouli, and sometimes live entertainment. 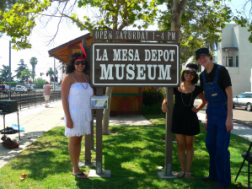 To reach La Mesa’s historic century-old downtown village, you can either walk a few blocks to catch a  trolley, or hail an Uber or Lyft for the short ride into the village if you don’t have a vehicle.  (The trolley also offers convenient access to points of interest in San Diego including Old Town, downtown San Diego, and Petco Park, the Padres’ major leagues stadium.)

In La Mesa’s quaint downtown village, within a three-block stretch you’ll find all of the following delicious restaurant options and more:

Farmer’s Table serves up farm-to-fork fresh cuisine made mostly with local ingredients, wood-fired pizzas in the open-air restaurant, plus a bar with creative cocktails—and a tractor! 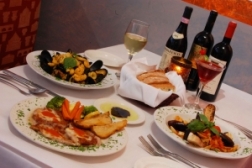 amisu Trattoria  has wonderfully authentic Italian foods with many specials that vary each week, plus Italian and California. (photo, left) 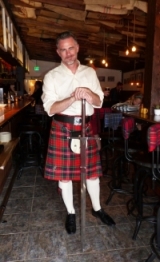 Bo Beau’s -- Owned by the famed Cohn Restaurants, Bo Beau’s has a “Bohemian chic meets industrial elegance” vibe and a menu with a few French-inspired dishes and plenty more such as mussels

Swami’s Café (photo, right, fruits and salad at Swami's) has an eclectic menu array includes many healthy options such as salads topped with fresh fruit, vegetarian dishes and smoothies as well as other options ranging from burgers to hearty entrees.

Centifoni’s Bar and Restaurant has a range of soups, sandwiches and main dishes, “beer boots” and big-screen TVs to watch sports events, 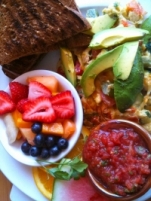 and best of all, its own in-hous 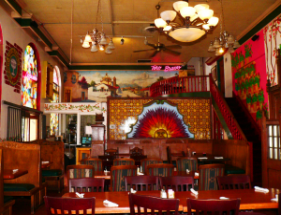 e candy shop and home-made ice creams, so be sure to leave room for dessert. They also have live music on weekends.

For Mexican food, you can choose from Por Favor, which has a patio and cantina with awesome Margaritas in a historic building that was once an opera house a century ago completed with colorful stained glass windows (photo, left),  City Tacos for street tacos,  or Mario’s for authentic Mexican fare.

The international cuisine options continue with Konichiwa Sushi, featuring a variety of sushi and sashimi, teriyaki, tempura and other Japanese specialties as well as  a bar.

You can find basic all-American hamburgers at Johnny B’s Burgers and Brew in the village, which has a  patio and fire pit for chilly weather, as well as more elaborate burger options at The Hills Local Pub, a few blocks outside of the downtown village. 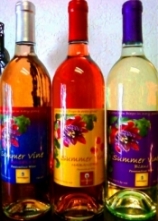 Wine lovers will want to be sure and stop into the San Pasqual Winery’s tasting room in downtown La Mesa (photo, right) which has wonderful reds, whites, sparkling, passionfruit and habanera wines. Arriba!  You can also visit La Mesa Wine Works off Center Street in La Mesa, a neighborhood that also is home to Helix Brewing Company and Bolt Brewery.   These establishments also offer entertainment and special events regularly so check their websites for a schedule of performers.

If you’re wondering why there’s a snail statue titled “Felix the Helix” next to a colorful tiled gazebo (photo, left) in downtown La Mesa’s “Lookout” Legacy Park (built for the centennial), it’s because nearby Mt. Helix was named for a snail in the area reputed to have been brought here by French immigrants eager for escargot.  Also downtown, you can check out a historic railway locomotive at an outpost of the Pacific Southwest Railway Museum at Spring Street and La Mesa Blvd.

Within the village are several locally owned coffee shops that are very good including Public Square Coffee (photo right) which has amazing scones and toppings plus a few healthy lunch choices, Light Bulb Coffee which also has its own custom coffee beans and creative coffee drinks with seasonal specials that may include pistachio, stra 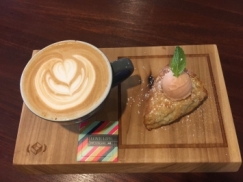 wberries or other unusual options, and Sheldon’s Station, which has mimosas as well as coffees, pastries and lunch items.

Beyond the village, La Mesa has many other good restaurants.  A few of my favorites outside of the village are Himalayan Cuisine at the intersection of Baltimore Drive and El Cajon Blvd., Village House 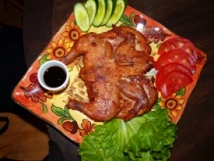 Kalina for hearty Russian and Ukranian cuisine (photo, left), Antica Trattoria, a Zagat-rated Italian fine dining restaurant and wine bar on Lake Murray Blvd., Riviera Supper Club and Turquoise Room on University Ave. if you'd like to grill your own steak (they also have a wine bar), and for Mexican food, the festive Casa de Pico formerly in Old Town and now at Grossmont Center regional shopping mall in La Mesa,  or Marieta’s, just a couple of blocks away from Grossmont Center.  The mall also has Hooley’s Irish Pub and Grill (photo, below right); a companion Hooley’s in nearby Rancho San Diego was ranked best Irish pub outside of Ireland by an international organization of Iri 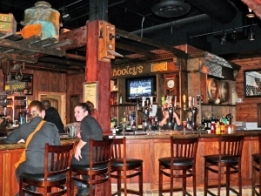 There are more great coffee shops outside of the downtown village; La Mesa must be the most caffeinated city in America!  Two of the most unique are Brew Spot, where you can sip a Lavender Latte or Venetian Coffee, and SpaceBar Internet Café, which has not only coffees but also smoothies, wine, beer, breakfast and lunch menus.

A great place to watch the sunset to top off your La Mesa visit is atop Mt. Helix (photo, left), where 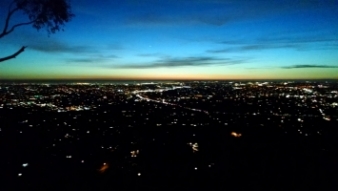 there’s also an amphitheater that sometimes has musicals and other special events in summer.  A place to find theatrical events year-round is Lamplighter’s Theatre, where a talented troupe puts on productions ranging from comedies to dramas. 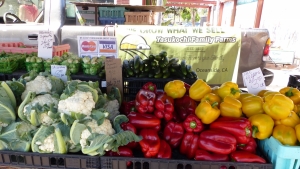 In summertime, the city has old car nights on Thursdays and a farmer’s market (photo, left) each Friday night in the downtown village.

There’s also a a Flag Day Parade each year in early June (photo, below left), as well as  Oktoberfest each autumn and a charming Holiday in the Village celebration each December complete with carolers and chestnuts roasting on an open fire. For details on these events visit the La Mesa Village Association. 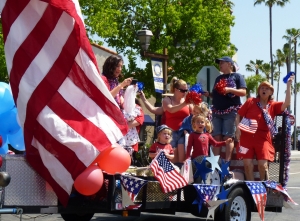 o has a recreation center with swimming pool, a park, classes and other activities just a few blocks from the downtown village.  Plus you can learn about the city’s history at the La Mesa Historical Society, which maintains a museum in a historic home that’s over a century old.

Just outside the La Mesa city limited, in unincorporated La Mesa, is Lake Murray, which offers fishing, boat rentals, ducks and geese, plus a walking/cycling trail around the lake, during daylight hours.   Overlooking the lake is the Lake Murray Golf Course.

For foodies, the La Mesa Chamber of Commerce also hosts a “Taste of La Mesa” each June offering samplings from dozens of local restaurants, wineries and breweries.

You can find more activities and attractions at the La Mesa City website.