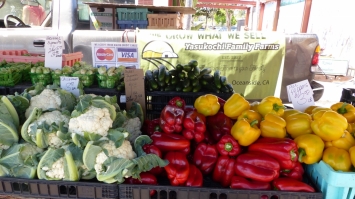 January 4, 2019 (La Mesa) – Opinions among stores and restaurants along La Mesa Boulevard remain divided regarding the city’s decision last March to move the Farmer’s Market into the downtown village. But while some restaurants report a sharp drop-off in business on Friday nights, the market has been a financial success for most farm participants and for the city’s coffers.

At a November 27 meeting, a staff report informed councilmembers that sales tax revenues in the village rose 2.6 percent in the second quarter of the city’s fiscal year over the same period a year earlier – and staffer Chris Gonzalez advised that the village was the only area in the city to see sales tax revenues rise.

The number of market vendors doubled and total gross sales rose by 80 percent from May, when the market opened, to September 2018.  The market is generating a profit also for the La Mesa Village Business Association (LMVBA) which runs in. Farm vendors did have a 20 percent drop in average weekly sales, which may reflect the fact that more vendors means increased competition.

The report also found parking still available even during peak market hours.  The merchant association has run a free shuttle service and there have been no resident complaints about parking problems, as had been feared.

While most businesses surveyed—70 percent – want to keep the market in the village on Fridays, 70 percent of restaurants oppose this.

“Since the market had opened, my daytime business has dropped considerably,” John Bedlion, owner of Johnny B’s Burgers Brew & Spirits, told the Council, adding that he’s lost $1,200 to $2,000 in sales on Friday nights.

Restaurants are anchor tenants for the village, drawing in many visitors. But the market does too; 35 percent of market visitors surveyed said they are from outside the city, and 71 percent said they dine at a village restaurant, meaning there is potential for restaurants to draw new customers over time.

Restaurant owners and other businesses had several ideas for improvements ranging from moving back to the original location to changing the date (an option the market operators say isn’t feasible due to market vendors being committed to other farmer’s markets on other days).

So the City Council chose a third option supported by some businesses.  Voting to renew the farmer’s market downtown for another six months, the Council majority also opted to change the layout. Instead of vendors lining both sides of the street facing the middle of the street, booths will be arranged back-to-back down the middle of the street. This will make storefronts more visible, potentially helping stores and businesses.  But it will also make visitors walk the length of the market twice to see all vendors on both sides.

Peter Soutowood, co-chair of the LMVBA and owner of the Fourpenny House restaurant, made the suggestion to realign the booths back-to-back instead of moving the market’s location or day.  “I would have the council consider that unless it wants to get back into the event-planning business…there needs to be a source of income like the farmers’ market that can keep the Village Association afloat,” he added, a reference to the Council’s brief foray into funding Oktoberfest after a former and now defunct merchant’s group ran out of money and stuck the city with a $40,000 bill.

Councilwoman Kristine Alessio questioned that assertion, noting that prior to the above-mentioned problem, the former merchants’ group had run events ranging from car shows to holiday events without farmers’ market funding. She voiced concerns over restaurants losing an estimated $100,000 on Friday nights.

Mayor Mark Arapostathis said the city could begin looking at other possible locations such as Lemon Avenue, Allison Avenue or the west side of La Mesa Boulevard across Spring Street, but joined the majority to vote to keep the farmer’s market downtown for now.

The original measure was amended on a motion by Councilman Colin Parent  to remove a provision that would have ended the market if no consensus is reached in 90 days. Ultimately, the revised motion to keep the market for another six months passed unanimously.  Staff is to report back in 90 days on results of arbitration between stakeholders.