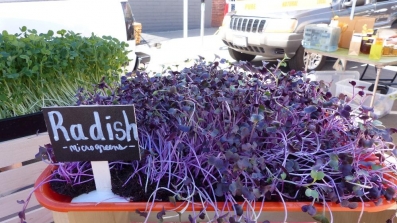 May 19, 2019 (La Mesa) – Frustrated by a lack of compromise between local businesses for and against the Friday night farmers market in downtown La Mesa, the city council has voted unanimously to end its contract with the La Mesa Village Association to run the market.  Council will put out a request for proposals from other operators to potentially move the market to another location or a different day,or keep the same location and days, but with improvements to resolve the rift.

If no entity comes forward, East County’s longest running farmer’s market could end after July 31, when the LMVA contract runs out.

The market has been held for more than 20 years. For years, it operated on Allison Street, one block off La Mesa Blvd., the heart of the historic downtown village.  It later moved to a parking lot on the opposite side of Spring Street near City Hall, before moving to the heart of the village in May 2018.

A staff report for the city after six months found the market was more successful financially than at the civic center location, that parking was less of a problem than projected, and that it was popular among residents as well as visitors to the downtown market.  The study also found a split among downtown business owners, however. Some indicated that the traffic from farmers market shoppers brought new customers to their stores. But others complained that their businesses lost customers on their busiest night of the week, citing a shortage of parking and food vendors offering hot meals.

The LMVA board rejected proposed compromises, contending that not enough farmers market  participants would be available on other days due to competing markets in other communities. The board also rejected proposals to reduce the number of hot food vendors, shorten the market’s hours, or using market funds to promote village merchants outside La Mesa to help offset any decreases for impacted businesses.  A proposal to change the layout to back-to-back booths in the middle of the street was nixed due to the inability for vendors to drive trucks in.

Pete Soutowood, LMVA president, told the Council, “We at LMVA are fully in support of the farmers market where it is,” adding that members believe “it’s a good thing for the Village.”  The market revenues help the LMVA fund other community events, such as Oktoberfest and the annual Holiday in the Village festival. It is unclear if those events can continue now that the LMVA will no longer receive revenues off a farmers market, even if a new operator is found.

Councilwoman Kristine Alessio made the motion to end the market and seek bids for a new operator. Councilman Bill Baber called the LMVA’s refusal to compromise “a Waterloo moment.”

Councilman Colin Parent offered up a substitute motion that failed 3-2. His plan would have kept the market downtown but mandated some compromises recommended by staff be adopted, a motion supported by Mayor Mark Arapostathis, who also asked that a shuttle service be required and no hot food vendors should be allowed.

Alessio’s original motion would have ended the market by May 1st, but ultimate it was amended to extend the market through July 31 to allow time to find a new vendor.

East County has already lost a farmers market in El Cajon, that failed due to lack of enough sales to be viable for merchants, and a farmer’s market at Cuyamaca College is no longer listed on the college’s website or the County Farm Bureau’s webpage of farmer’s markets regionwide.

Farmers markets still listed as operating in East County, according to the  Farm Bureau, are in Santee on Wednesdays, Lemon Grove in Thursdays,  Borrego Springs on Fridays and Santa Ysabel on Saturdays. SDSU also has a farmer’s market on Thursdays, with details here.

Anyone interested in bidding to run the farmers market and submitted a proposal should register on PlanetBids and submit proposals through the website.  All questions on the RFP should also be submitted through the portal for full transparency to the public.