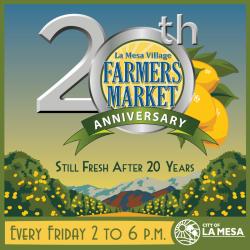 The weekly market, held at La Mesa Civic Center, has become a Friday gathering place for La Mesans and East County residents. The celebration will include all the usual market amenities, plus a live DJ, free face-painting for kids, a booth decorating contest for vendors, and prize raffles. Shoppers will receive free 20th Anniversary shopping bags while supplies last and the City will also unveil new street banners featuring a special 20th Anniversary logo. The City of La Mesa invites citizens and visitors from throughout the region to join in celebrating this milestone.

The City Council voted to create the outdoor farmers’ market in 1993 to bring fresh produce to the community and to promote the Downtown Village area. Though it was unclear at the start what the future would hold for the market, strong citizen support and the City’s commitment have not only sustained the market for twenty years, but also helped it to thrive and grow.