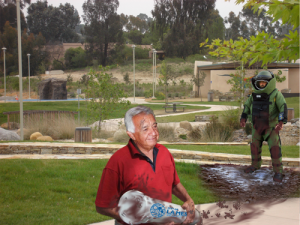 Early this morning,  however, a broken sprinkler line saturated Briarcrest Park, where a groundskeeper discovered a sealed pipe protruding from the mud.  He called La Mesa Police, who feared that the mud-spattered object could be a pipe bomb.

The  bomb squad was summoned. Officers cordoned off the park and surrounding areas, prepared to detonate the suspicious device.

Fortunately, a bomb squad officer spotted a logo partially obscured by mud.  Upon closer examination, he recognized the City of La Mesa seal and a notice proclaiming “Open for Centennial.” After x-rays confirmed the device contained no explosives, a press conference was called.

Mayor Art Madrid opened the capsule in the presence of City Council members, staff and press.  Inside were old photographs and memorabilia – along with a large bundle of stock certificates.

“Unbelievable,”  he exclaimed.  “1957 was the year Standard & Poors, the S&P 500 index, got started. Our mysterious donor bought up stocks on the original S&P!”

“So what are those old musty stock certificates worth today?” Mayor Madrid asked.

Mayor Madrid broke into a grin.  “Our budget crisis is hereby resolved.  Now let’s get ready for the party of the century!”