June 27, 2016 (La Mesa) – Ellen "Gigi" Draper from La Mesa won a car on the Price is Right earlier this month. She and her husband, Robert “Bob” Draper went to Los Angeles the night before in order to be first in line in hopes of being picked by host Drew Carey.

“I had on an orange shirt and it says, `HI Drew, I need help. Married 58 years to Pop Pop, Mother of four boys and 1 girl, grandmother of 18 and great-grandmother of 15. I need a vacation – Gigi.” 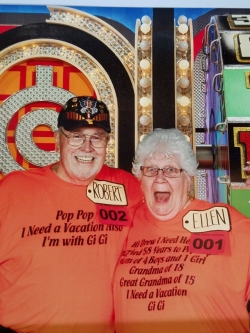 t worked.  Chosen as a contestant after two prior attempts and years of being a fan of the show, she recalls, “When I was on the show I was hoping for a car or a vacation for myself.”

You can watch video of the lucky winner by clicking the image above, or this link, courtesy of Fremantle Media North America: