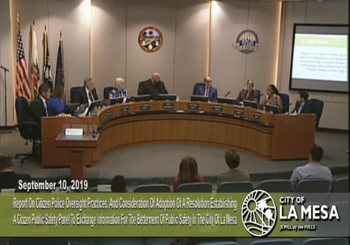 September 20, 2019 – (La Mesa) – La Mesa Police Chief Walt Vasquez presented a report on citizen police oversight practices at last week's City Council hearing and made suggestions for an 11-member Citizen Public Safety Panel to exchange information for the betterment of public safety in La Mesa. But his panel would lack investigative powers to look into complaints involving the police department.

Public testimony was against the Chief's proposal, and Councilwoman Dr. Akilah Weber grilled Vasquez on whether he adequately canvassed residents for input.

“Regardless of what kind of model we have or if we have it at all is something the residents need to have significant input on,” said Weber.

Calls for a citizens oversight or review commission arose after an incident in January 2018 at Helix High School in which a video that went viral showed a La Mesa Police officer forcing an unarmed female student to the ground. The student has filed a lawsuit against the city.  The city ordered an independent review which found no wrongdoing by police, but Councilmembers and the public were dismayed to learn that the law prohibited them from reading the full report, which was provided only to the police chief.

Mayor Mark Arapostathis agreed with Weber on the need for transparency in discussing an oversight body. “I think that every time we talk about transparency with 60,000 people, trying to get the word out to everyone [so] that people who are interested in this have an ample opportunity to weigh in [is challenging]. We need to cast a wider net for everybody to get perspective because sometimes when you're too close to something you lose perspective.”

“Even some of the lawyers up here don't know all the legality in terms of the cities and all of the options for oversight, and so I do think that it's important that we do go out into the community,” said Weber. She continued, “I think that in developing a policy if that's what we ultimately do, I do think it needs to be a smaller group." She voiced skepticism in a the Chief's proposal for a safety panel without invesigative powers and suggested that any oversight board include "representation from the four different beats, someone from the faith, business community, someone from 9th through 12th grade, I think that would be a good group to eventually down the line work together with the community and with the Chief to figure out what would work for La Mesa.”

“It almost seems like if we appoint this group, that will be the next step in getting to where we want to go. The group will meet, it will be with the lawyers, with the Chief,” said Councilwoman Kristine Alessio, who joked that she didn't want word on the street to be that they sent it to committee, but that the Council should also take some sort of action tonight.

“They have hearings. They invite the public to speak. They use all the tools and resources the City has to get the word out about the meetings,” advised Councilman Colin Parent.

“That's what we were working for,” agreed Jack Shu, a citizen and former law enforcement officer who has been advocating for a police oversight committee. “We were working towards a process that would get us towards that position, and that's what you're doing now.”

There are limits to what a general law City can do, as police oversight is vested in the Chief. Concilman Bill Baber liked a general law city to a box.  "“So, we can fit some things that you want to do within that box, or you can expand that box, by going with a Charter, or, you can go further, and change state law,” advised Councilman Bill Baber. He continued, “I want to comply with the law. I don't want to get sued. And so, remember, don't just solve the people problem, solve the structural problem, whoever does this.”

Alessio noted, “I think even though there's frustration, in essence what the Chief was trying to do was create the functional equivalent of what the citizens are asking for,” said Alessio. “Something broke down and people didn't understand each other, but that's what we're here for. It sounds like everything that we are looking for that Committee to do, he was trying to do, with this board, and I commend him for that.”

“I know that's not a motion but I do want to second it,” said Parent, interrupted by laughter from Baber and the audience. “A little parliamentary procedure joke vote for everybody here. I'm hearing that there's really two things that people want out of this. They want some sort of either review or investigatory capacity, and they also want the ability to advise on policy issues. The proposal from the chief doesn't include the first part, but it does include the second part, in a permanent manner.  So, what we're actively talking about now, is to not do that.."

Ultimately, the portion of Chief Davis' proposal to which Council agreed was the format of his 11 member board, with the exception of the youth slot going to a high schooler, and a member of the Police Officer Association will fill one of the two slots formerly allocated to the business community. The ultimate motion was made by Weber and seconded by Arapostathis.

Rather than being responsible for police oversight, the oversight review board will survey the community for input, analyze other similarly sized general law cities such as Tulare, Davis and National City, and establish its own recommendation, in consultation with the Chief, lawyers and the public.