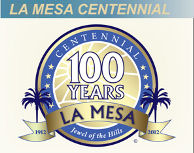 January 29, 2012 (La Mesa)--In an on-going commitment to communicating with residents and in honor of the City’s Centennial, all five members of the La Mesa City Council will host a Town Hall Meeting. The open-forum session is set for Tuesday, February 7, at 6:30 p.m. at the La Mesa Community Center, 4975 Memorial Drive, La Mesa.

All La Mesa residents are encouraged to attend and participate in a discussion about community issues with the City Council. The Town Hall Meeting is intended as a means for citizens to learn about City services, state what they like about La Mesa, how they envision the future of their city, and to express concerns.

Each attendee will be able to publicly address Councilmembers or simply to listen. Councilmembers may then respond to questions or refer the matter to City staff or suggest resources for further study or action.
Further information about this meeting is available by calling the City Manager’s Office at 619-667-1105.