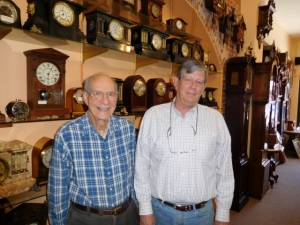 Certainly those connected to the city of La Mesa’s Centennial Celebration in 2012 would concur that it’s nice to see a key project commemorating the milestone gradually emerging at the Lookout, or the confluence of La Mesa Boulevard, Allison Avenue and Fourth Street.

In recent weeks, the foundations for a gazebo, a 13-foot clock, and a bronze snail have been installed following a long hiatus when no work was done. The project that broke ground last July is now slated for completion in June.

“They’ve made very good progress in the last few weeks...and they’re pouring the concrete for the interior portions,” said Jim Simpson, the owner of Time and Treasures, an antique store on La Mesa Boulevard specializing in clocks.

Simpson and his wife, Sherry, along with La Mesa Beautiful, a local nonprofit, are sharing the $8,400 cost for a replica 1880s street clock that will be visible from both directions on La Mesa Boulevard. Simpson said the clock is in memory of their son, Ryan.

The city agreed to pay for the $9,500 cost for installing the clock, including building a one-foot-high foundation. Called “The Glenna,” the time piece is two-sided, and contains all modern components, although the faces will state, “Est. 1912 La Mesa.” 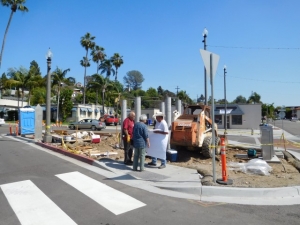 Bob Bradshaw, vice president of La Mesa Beautiful, said his organization, which donates trees to the city, is also donating $3,000 for a maintenance endowment for the clock.

While the clock seems to have proceeded along in a timely fashion (the City Council approved it in October), the same can’t be said for the Legacy project, which was supposed to part of the city’s celebration of its 100th anniversary in 2012. City officials blamed delays involving the Downtown Village Streetscape Improvement Project, which was finally completed in December.

“The project did get delayed and that was because of the streetscape project,” said Assistant City Manager Yvonne Garrett, referring to the city’s $5 million project that closed parts of downtown La Mesa’s sidewalks for more than a year. The project also caused several local restaurants and stores whose entrances were impeded to complain about the job’s length.

At least one couple who donated to the Legacy project was so upset by the delays they demanded their $40,000 donation to the project’s $165,000 total cost be returned. Garrett identified the donors as Jerry and Grace Lester. Attempts to contact the Lesters were unsuccessful.

The delay actually worked out well because it provided the artists to complete their work, Garrett said.

“We’re patient people, and we try to roll with whatever happens,” said Mary Lynn Dominguez. “We’re just glad to see it getting done.”

Dominguez, along with her husband, Jesus, and daughter Amy were selected from a group of three finalists in a competition for the art work in 2011, said Patty O’Reilly, a member of the Centennial Celebration Committee.

Because all of the funding for the Legacy came from private donations, it created some uncertainty. “Usually projects like this are funded up front, but this one was funded by the community, and it’s a difficult process to raise money,” Dominguez said.

In addition to a gazebo holding six panels of tiles depicting events from La Mesa’s history, the art work includes a bronze sculpture of a Helix aspersa snail (namesake of Mt. Helix), a time capsule, a donor monument sign, sidewalk and seat wall. The clock addition came after the Dominguez family was awarded the commission, but it wouldn’t have been their choice.

“We weren’t thrilled about (the clock) but there wasn’t enough opposition to it,” Mary Lynn said. “It wasn’t our preference but we didn’t want to make a big deal about it.”

The city’s cost for the Legacy Project wasn’t detailed and was incorporated in the overall costs of the downtown streetscape project, Garrett said. Those costs included constructing the curbs and gutters, utility access, an acorn streetlight, protective bollards, irrigation and landscaping, and the time capsule.

According to Garrett’s report in July, the total of private funding for the Legacy Project raised at that time was $165,000. Any additional funds raised will be set aside for a maintenance endowment.