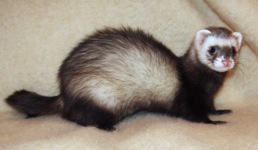 August 18, 2015 (La Mesa)—Our staff has been hard at work ferreting information out on proposed initiatives seeking to weasel their way onto the 2016 ballot.  Here’s a scoop: La Mesa resident Pat Wright has proposed a ballot measure that would ask California voters to legalize owning ferrets as pets.

The Legislature previously passed a bill that would have decriminalized ferret fans from owning the weasel-like animals, but Governor Arnold Schwarzenegger thwarted ferret fans by vetoing that bill.

Now, California Attorney General has cleared the ferret-legalization initiative to start the signature-gathering phase, so watch for petition gatherers at your local grocery stores or other public places. It’s still a steep hurdle though for ferret aficionados to climb, since over 365,000 signatures are needed to qualify the measure for the ballot.

The Sacramento Bee reports that Wright is baffled over efforts to block ferret ownership. “If you don’t have ferrets, why do you care?” he asks.

Wright enjoys the energetic interactivity of his ferret friends. But he admits his ferrets have occasionally nipped him and he had to replace baseboards in his house due to damage from his trio of feisty ferrets—Tiger, Bailey and Jethro, Reuters reports. Another of his former ferret pets was ordered euthanized by the state after it bit a cameraman at a pro-ferret rally, according to Reuters.

Ferret fans are fighting back against the ban with a website, www.LegalizeFerrets.org. They contend that bites are rare and that despite being legal in 48 states, ferrets have not run wild to wreak havoc in the environment.

That debate has turned heated at times. The Legalize Ferrets site contends that state Senator Joel Anderson from San Diego’s East County once accused a ferret lobbyist of a bribery attempt in his legislative newsletter; the group denies that any such action occurred.

California isn’t the only place where ferret ownership is outlawed.  The state of Hawaii has banned them, citing fears of domestic ferrets being released into the wild and becoming invasivre species.

New York City also has a ferret ban. City health officials  there warned of “vicious, unprovoked attacks” by ferrets amid a failed effort by activists to overturn the city’s ban.  Ex-Mayor Rudy Giuliani once infamously stated on his radio show that “excessive concern with little weasels is a sickness” and called ferret fans “deranged.”

So the ferret fight continues—and soon California voters may have the final say.