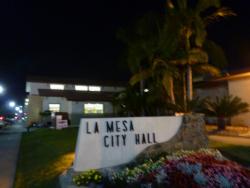 September 25, 2015 (La Mesa)--Responding to a request to install lights at a known drug dealing hangout, the La Mesa City Council directed its staff Sept. 22 to devise some solution at the site.

Larry LaHaye, the owner of several apartment buildings in La Mesa at Schoolridge Lane, told the council that the street’s 56 families residing in the apartments have a safe neighborhood but a small park at the end of the cul de sac remains a problem.

Because the small park has no lights it continues to be a draw to vagrants and drug dealers, LaHaye said.

“We need the city to help us,” he said. If some type of solar lighting was installed, it would discourage this activity, LaHaye added.

Mayor Mark Arapostathis said the “request is not falling on deaf ears.”

He said as a longtime teacher at one of the schools near the street, he was well aware of the problem, and has personally mended a chain link fence at the park.

Acknowledging a consensus to address the issue among his fellow council members, Arapostathis asked city staffers develop a lighting solution and bring it back for the council to consider “at a reasonable time.”

In other issues, the council approved by a unanimous vote to direct its representatives to continue negotiating with Westmont Development LP on the development of an assisted residential care facility for seniors at the northeast corner of State Route 125 and Murray Drive.

The 3.3.acre city-owned site had previously been planned for similar senior housing by Briercrest Development LP in 2004. After the developers were unable to secure financing, the city terminated its agreement in 2010, prompting a lawsuit by the developers. The city prevailed in 2011, but that decision was appealed. Last year a state appeals court upheld the ruling, clearing the way for the city to find a new development partner.