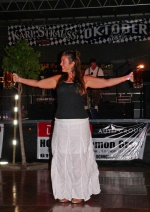 October 7, 2009 (La Mesa) – The big beer garden filled to capacity on Friday and Saturday night, when party-goers from around San Diego County gathered in downtown La Mesa to celebrate La Mesa’s Oktoberfest. Entertainment ranged from polka dancing to a rock-and-roll band, plus perennial favorites such as the beer stein hoisting contest (photo, left). La Mesa Police estimate that more than 200,000 people flocked to the three-day event. 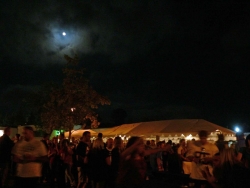 “I liken this event to Thanksgiving dinner, but on a much larger scale,” said La Mesa Chamber of Commerce president Mary England. “It takes hours to purchase all the ingredients for a fabulous meal, hours to prepare and cook, time to set the table, clean the house and have everything in shape for the company to arrive and in a matter of a few short hours you are clearing the table, putting the leftovers away and washing the dishes!” 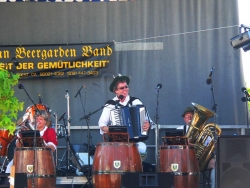 “I am thrilled at the excitement of the community when entering the big beer garden and grateful for the support of the Mayor and City Council, who allowed us to produce this community event in the larger space - 35,000 square feet,” said England, who thanked all who participated in making the event a success.“The City Staff helped us work through all of the ordinances and for our first time event in this venue, were patient with us as we learned what to do and not do,” she added. “The public support was tremendous and we were glad we could partner with the La Mesa Village Merchants Association to produce this city-wide event.”

Police arrested about 15 people on infractions such as drunk and disorderly conduct, but overall the event ran smoothly. 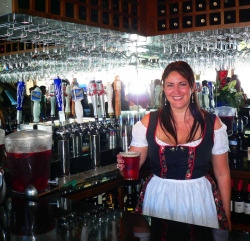 At Gio's Bistro Wine Bar (photo left) and other local restaurants along the Oktoberfest route on La Mesa Blvd. were packed, boosting sales tax revenues for the City of La Mesa. Many vendors reported brisk sales and estimated crowds were bigger than in the past, though some said people were spending less due to the faltering economy.

“The publicity and exposure to the City of La Mesa is tremendous through an event like this and I only hope that many of the business community will see repeat business due to this exposure. After all,” England concluded, “When the cash register rings - everyone wins!”