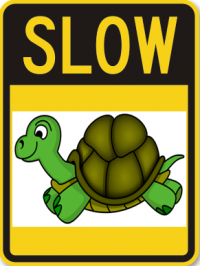 April 27, 2015 (La Mesa) – Back in December 2013, the city of La Mesa installed roundabouts to slow down speeders at two locations on Harbison Avenue, at the Watson Way and Annapolis Avenue junctions.

But the roundabouts caused problems of their own. Instead of slowing down, speeders smashed into parked cars and wound up on residents’ lawns, residents told the City Council at a meeting last month—and asked that the roundabouts be removed.

The speed limit on Harbison is 30 miles per hour. Before the roundabouts were added, average maximum speeds were 61 and 70 miles an hour at the two locations. That did decrease slightly to 50 and 60 after the roundabouts were built—still far in excess of the legal limit, but with property damage to boot as drivers swerved to avoid the roundabouts, especially at night, UT San Diego reports.

For now, the city will restore the intersections to how they were before the roundabouts were added.  City staff will study the situation to propose alternative ways to get motorists to slow down.