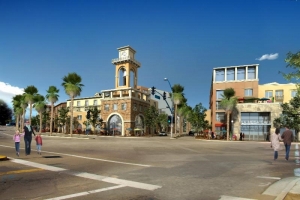 September 25, 2014 (La Mesa) –The last hearing on a proposed high-rise development in La Mesa ended in a shocker, when an American Legion spokesman announced his organization was withdrawing its support as a co-applicant of the controversial Park Station at the Crossroads of La Mesa project.

Now, Park Station’s backers have submitted a revised plan without the American Legion as a co-applicant.  La Mesa’s Planning Commisson will hold a public hearing on the revised plan on Wednesday, October 1st in the City Council Chambers ( 8130 Allison Avenue, La Mesa). The hearing starts at 7 p.m., with doors open at 6:30 p.m.