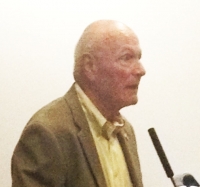 Project will advance to City Council

Story and photos by Janis Russell

May 21, 2015 (La Mesa)- At yesterday’s meeting, the La Mesa Planning Commission voted to deny approval of a revised Park Station plan because of its inconsistency with the general plan and community objectives. The vote was 4-2 with Commissioner Dexter Levy absent.  Next up, the City Council will be asked to decide Park Station’s fate.

This was the developer’s third attempt to win approval.  The plan had been dramatically scaled down from 190 feet in height originally proposed  to a maximum of 75 feet in the latest proposal, though still far over the 46 feet height limit citywide and double the allowable density. The latest plan increased density and added a hotel, but reduced parking. A controversial aspect has been the developer’s effort to  get approval of a specific plan solely for Park Station so that zoning requirements of the historic downtown district and other areas in La Mesa would not apply.  It would have included a “by right” ability to make future changes without city approval, or what critics referred to as a “blank check.”

Community development director Bill Chopyk gave a presentation about the plan. He first asked the commission to consider if the Environmental Impact Report (EIR) adequately addressed all potential environmental impacts and met requirements of the California Environmental Quality act (CEQA). He added that there’s “now a lesser impact at 75 feet.”

The plan they were considering at yesterday’s meeting, from March 2015, includes: 4.77 acres (gross), two property owners, two planning areas, two phases, and no public park. The building height is now 75 feet, 6 stories max. Zones A and C have 46 feet height. Changes from June 2014, besides the 75 foot height building, also include 1.25 parking spaces per dwelling unit.

Chopyk also proposed traffic and pedestrian improvements. Those included: improvements at Nebo with a better connection to Spring St, bicycle lanes at Baltimore Dr, and University Ave/Baltimore expanded to a four way intersection among others. One significant unavoidable environmental impact is the air quality and greenhouse gas emissions.

Commission also needed to grant a waiver from standard development and determine that the proposed development is consistent with La Mesa’s general plan.

Sherman Harmer from Urban Housing Partners also gave a presentation. “We have been working hard to make the adjustments outlined by Mr Chopyk,” he added. They adjusted the building height limit, and they proposed that 40% of the height would be six stories, and 60% at four stories. The six story buildings would be in the back along Nebo, Spring St, and the trolley. The four story buildings would be on the front at Baltimore.

They also wanted to build a hotel with two levels of lobby and meeting spaces, and four levels of 150 rooms. The hotel would include a grand ballroom with 15,000 square feet of common space. Benefits of the mixed-use urban village proposed would include hotel/event space, for play, work, and centralized surface parking without the use of a car. It would also have senior housing, new dining and shopping options, and a small town feel, according to Harmer.

The current plan proposes one unit with 363 stalls. They proposed and were prepared for 1.25 units with 454 stalls. There would be sharing parking with commercial tenants for the 1.25 units.

Lenette Hewitt, Vice President of marketing who deals with community outreach, told commissioners about the comments they have received from supporters. These people have posted on social media. She also put together a packet of all the support they have received with those supporters’ contact information.

Harmer added that they would now be willing to use the CUP (Conditional Use Permit) if the plan was approved with the hotel. That wasn’t in their original proposal.

The rest of the supporters then shared their views. 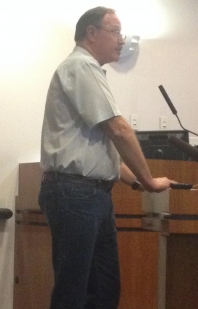 Developer Frank Kitzman (photo, right) mentioned that 75% of the surrounding properties are commercial, retail, and office. “The mixed use overlay does allow building height up to six stories…But it does not mean we can’t do whatever we want without the city approval.”

Lys Severston said “I do trust that the process now will be right… I trust the design board.” She also expressed her excitement about the transit-oriented development. She wants to walk around La Mesa more, and wants to bring her clients to the hotel and show off La Mesa to them.

Bill Hammett, who’s a property owner in La Mesa Village, was also excited about this. He has been heavily invested in the community.

Mary England, president of the La Mesa Chamber of Commerce, said the board of directors is in full support. “That is a gateway to the city,” she added. She was excited about the hotel and holding activities there that support restaurants and more.

Jacob Schwartz from Urban Housing Partners addressed crime concerns, noting that the project has underground parking to mitigate car thefts. “I’ve been involved in community input since the very beginning,” he said, adding that since the inception of the project, people wanted a hotel, more shopping, more housing, and senior housing.

A few other speakers who expressed support were Robert Chase, Stephan Gaspar, Justin Schlefli, and Michael Stonehouse but they did not provide details.

Aaron Amerling started off the opposition side. We are “not for the specific plan.” He argued that La Mesa already has a plan in place.

Mary Earnest  said  she supports new development and the mixed-use urban overlay but she doesn’t like the Kitzman’s request to receive a waiver. She asked commissioners to “stick to what’s already been developed… It will serve our communities well. It will serve our businesses well, and it will serve our residents well.” She was also in support of the hotel.

Lili Feingold, a La Mesa resident who has been a sixth grade teacher, brought up how rules are important for a reason, and that they help keep everything in order. She disapproved of the Kitzman’s getting a blank check for the six stories.

Mary Jane Bailey, who has lived in La Mesa for 20 years, thinks there are too many exceptions and options that the owner is requesting. That included the blank check. She wanted them to follow the guidelines of the specific plan.

Harold Bailey, who used to serve on the commission, recommended not approving the proposed development, but wanted alterations.

Nellie Andrade, who has lived in La Mesa since 1974, was shocked at the options being presented. She didn’t like the idea of giving somebody a blank check and hoping they’ll do good with it. She also voiced concern over increased traffic.

Roger House thinks that 1.25 units for parking is “totally inadequate. There’s no way we can live with it.” Also, with regards to this plan offering more jobs, he wanted to know where the employees and visitors park. He argued that the 1.25 units doesn’t even include the new employees.

Laurise Gerk from La Mesa also brought up the issue of the blank check, likening it to “giving your okay with clouds in the air.”

George Morgan said the computer generated photos are misleading. The photos are taken from the top view. He wanted the photos to be shown at different levels.

Patricia Mulcahey, a property owner, said she is directly impacted by this. She lives on El Capitan. She wanted the plan to be consistent with the neighborhood, and  believes there’s not enough parking. She also didn’t want a waiver, and believes they should build with the plan already laid out.

Craig Maxwell, a La Mesa resident and owner of Maxwell’s House of Books, mentioned how he comes across a lot of people in his business. He argued that the village should be protected. “It’s the jewel of the city.”

Jim Whitney, who has lived in La Mesa since 1950 and is now retired, said, “The city is spending millions in the plan downtown. Meanwhile, these people are turning [La Mesa] into high rise, high density… There are no limits to what they can do… It’s just about greed and that’s what I see here.” He also added that the Kitzmans don’t care about the Village.

Karen Anderson, who has been a La Mesa resident for the last 23 years, is also highly impacted. She asked commissioners to consider the high amount of crime and those impacted by it.

The applicant was then given a chance for a rebuttal. Harmer argued that they need a specific plan; it’s very common and it reflects a lot of the city’s plan, he maintained. As for parking, he said, “The parking standard we proposed is very similar to parking standards all over California.” The developer agreed to change the measuring height, and the building height would be measured according to the city’s guidelines. So there won’t be a flat garage. “We’ll have to heighten the garage down,” Harmer said. That would cost a lot of money, he noted.

When commissioner Jim Newland asked if they would be willing to go through the Conditional Use Permit process with other uses besides the hotel, Harmer told him that process isn’t required for those.

Commission Janine Hurd Glen wanted to know how much would be set aside for senior housing. Harmer said 25%.

Newland then moved to recommend certifying the EIR as adequate. Hurd Glen gave a second. The vote was 6-0 with Levy absent.

The commission then had a discussion about the specific plan. Vice Chair Michele Hottel brought up how people are worried about the blank check. “I think if there were more specifics in this plan, people would be agreeable to it,” she said.

Hawkins said that the lack of specificity concerned him.

Hurd Glen brought up how the specific plan is not meeting many guidelines of the city.

Newland made a motion to not approve the specific plan due to its inconsistency with the general plan and community objectives. Hurd Glen gave a second.

The vote was 4-2 with Newland, Hurd Glen, Hawkins, and Chair Noah Alvey voting no. Hottel and Hawkins voted yes, despite his concerns over vagueness in the plan.

The measure will next proceed to the City Council, which includes three newly elected members.

ECM asked Harmer about the concern voiced by many over the “blank check” that they believe gives too much flexibility for changes under the by right” provision.  Harmer told ECM he found that idea appalling and insists there is no blank check in this plan.

“The specific plan is 100 pages of accountability,” he insists.