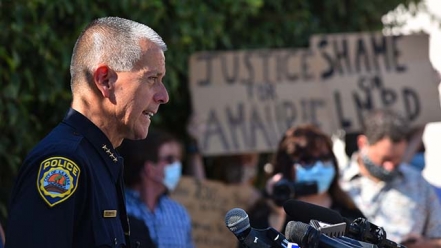 “Chief Vasquez delayed his retirement decision when the health pandemic hit in mid-March,” said a news release. “He opted to remain in his leadership post to assist the Police Department and the City of La Mesa with navigating a situation that our nation had not seen for more than a century.”

The news didn’t immediately reached La Mesa Councilman Bill Baber. Close to 2 1/2 hours after the release, he asked City Manager Greg Humora whether a text he received was true.

Vasquez thanked the men and women of the department for “their tremendous support and commitment to the community it serves.” He didn’t specify when his departure takes effect.

His statement didn’t mention recent events, including the May 27 arrest of Amaurie Johnson by now-departed Officer Matt Dages near the Grossmont Trolley Center or the police beanbag wounding of Leslie Furcron at the May 30 protest that preceded a night of arson and looting.

“Over the past five years, our team has worked very hard to keep the citizens of La Mesa safe,” he said in a statement. “The decrease in property and violent crimes in the City from 2015 to 2019 has been the largest decrease of all incorporated cities in San Diego County.”

He added: “This is extraordinary, especially when you take into consideration that the La Mesa Police Department is one of the lower staffed departments in the County. Crime decreases of this nature are only achieved through hard work and collaboration with the citizens we serve.”

“I have known Walt my entire career and have always admired him as a leader of unmatched integrity and compassion,” she said. “He is known throughout our county law enforcement community for being a leader who places community first by fostering community engagement, promoting problem-solving, and reducing crime.”

Kennedy, who also serves as president of the Police Chiefs’ and Sheriff’s Association, added, “Especially during these unprecedented times, Walt has shown what calm and steady leadership and an experienced leader can mean to a community.”

“Despite recent challenges of the Covid-19 pandemic and social unrest, he has shown an unwavering commitment to serving the people of La Mesa with heart and dedication. Chief Vasquez’s leadership has had the continued support and respect of his fellow officers, community stakeholders and the greater law enforcement community and I wish him the best.”

A protest group at the La Mesa police station June 14 wanted the La Mesa City Council to hold an “open, public town hall to hear and follow the demands of the people it swears to serve.”

Williamson, one of close to 50 taking part, complained via phone Thursday about talk about criminality and lawlessness on one side but not on “their own side.”

“I want to know what’s going to happen to the two men that jumped on our teenage children at a protest that was peaceful,” she said, not specifying when this took place.

“I want to know what … what their charges are going to be because these are hate crimes,” Williamson said. “I have not heard anyone talk about what is being done on their own side, especially you, Councilwoman [Kristine] Alessio.”

She alleged that Alessio—once an administrator of the La Mesa Civil Defense private group on Facebook—hasn’t denounced hate crimes, including use of the N-word, b***hes and f***ots on the Facebook group.

“You should be ashamed of yourself,” Williamson said, addressing Alessio, also on the Zoom session. “So when you talk about one, you should talk about all. We want justice. We want equality. We want fairness.”

She closed her 2-minute remarks by saying: “We do not want disproportionate waits that continue to be what is happening across this county, but especially in the racist towns like La Mesa.”

Vasquez began his law enforcement career in 1986 with the San Diego Police Department, rising to the rank of assistant chief before being sworn in as La Mesa’s 11th chief of police in April 2015.

More than two hours into the Town Hall, one caller called for the firing of Vasquez.