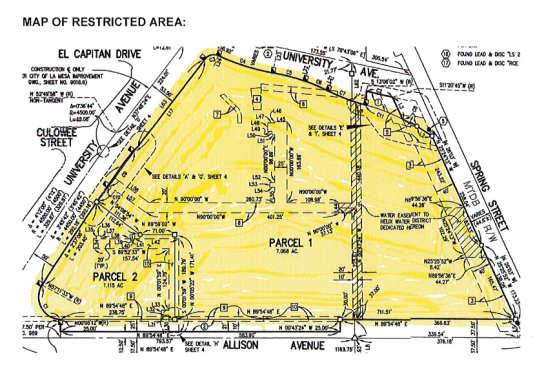 July 31, 2020 (La Mesa) – The La Mesa Police Department has issued a press release warning of a protest planned Saturday, August 1 starting at 3:30 p.m. by organizers who have not responded to inquiries from LMPD. In addition,  City Manager Greg Humora has issued an emergency order banning many weapons and objects that may be used as riot tools in a restricted area around civic buildings from noon tomorrow through 5:30  a.m. Sunday. Banned items including sticks on protest signs, bats, guns, knives, explosives, glass bottles, spray paint, and many more objects.

A flyer circulated online touting the protest over police use of force issues indicated that “civil disobedience” was planned and urged participants not to bring children, indicating the event is for age 18 and up. The flyer has prompted uneasiness among downtown merchants, some of whom have boarded up storefronts in anticipation of potential civil unrest once again.

Protesters have repeatedly targeted La Mesa in recent weeks following a stop characterized as racial profiling of a young black man, Amaurie Johnson, who has filed a lawsuit against the city.  Demonstrators have also objected to police firing beanbags at protesters, including Leslie Furcron, who was shot in the head with a beanbag after she threw an object at officers during the May 30 protest, as video shows.

While the May 30 protest ended in violence, some other protests organized by labor groups and motorcycle clubs remained peaceful. A small protest last weekend fizzled after more members of an East County  Defenders group showed up than protesters. La Mesa has its own civil defense group that formed to protect downtown merchants after many were victimized without adequate police protection during the May 30-31 riot.

This time, some sources indicate LMPD has reached out for reinforcements from other law enforcement agencies. The police station is reportedly fortified in preparation of potential trouble, though police indicate their intent is to allow a peaceful protest, but not violent or unlawful actions.

The La Mesa Police Department is aware of a planned protest and march that is scheduled to take place at the police station tomorrow, August 1, beginning at 3:30 p.m. We have instituted plans in place to facilitate a peaceful event for all involved.

Members of the public planning to visit the downtown La Mesa area are advised they may experience traffic delays and businesses may be closed earlier than usual. We ask those participating in the protest to also respect the rights of others by not blocking roadways. This will also ensure clear pathways for ambulances, fire trucks and patrol cars responding to any emergencies.

The La Mesa Police Department has made numerous attempts to communicate with organizers of the protest and march so we can work together to ensure a safe environment where their voices can be heard. Unfortunately, all attempts to contact the organizers have been unsuccessful.

It is our goal that tomorrow’s event is a safe exercise of the right to peaceably assemble. We have teamed with our mutual aid partners across the county to ensure we have ample resources on hand to handle violent civil unrest should the need arise. Should those attending resort to committing acts of violence or other crimes, they will be subject to arrest and the event will be legally declared an unlawful assembly. Anyone choosing to remain in the area will be subject to arrest per California Penal Code section 409. The violation is a misdemeanor.

The city’s executive order cites “conditions of extreme peril to the safety of persons and property” that occurred as a result of rioting and looting related to a police protest that began on May 30th; by morning, three buildings had burned down and dozens of businesses had been looted or vandalized.

The order restricts any item considered an “implement of a riot” that may be used as a weapon within a restricted area between noon Saturday and 5:30 a.m.  Sunday. The restricted area is described as:

Michael Schwartz, who heads up the San Diego Gun Owners Association PAC, says of the order, "My opinion is that law abiding gun owners shouldn't be banned from self-defense in places like post offices and city halls. Ever. But this order appears to be legal."

They did allow signs, even signs with sticks. They just didn't let them go onto the city property compound where the police station, city hall etc. are located to prevent vandalism of those builidngs.

They protest stayed peaceful in the civic center area, along with a march, other than a couple of skirmishes between protesters and Defend East County folks who also turned out. There was one arrest, of someone who may have been haranguing the protesters, according to witnesses. There was a major police presence. Overall this was very different than the May 30-31 events.

"Congress shall make no law...abridging free speech or the right to assemble...."

Signs should be allowed, bats and spray paint not.