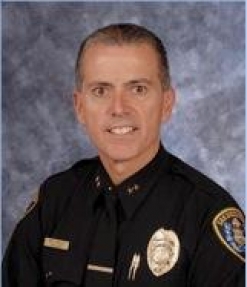 Suspect is a person of interest in an Ocean Beach homicide
By Miriam Raftery
Photo: LMPD Chief Walt Vasquez
May 2, 2019 (La Mesa) – Daniel Chase McKibben, 36, was shot in the shoulder and hand by a La Mesa Police officer who fired three shots at 9:15 a.m., Chief Walt Vasquez reports  Officers responded to a call reporting a trespasser who refused to leave a residence at 7920 Rainey Street and found the suspect armed with a knife.
In an update to an earlier media release, LMPD reports that McKibben is a person of interest in a homicide that occurred May 1st on Niagara Street in Ocean Beach. San Diego Police Department has been notified and is assisting in the investigation.
McKibben was transported to a hospital and is in stable condition.
Details on how McKibben was identified are not being released at this time, says Chief Vasquez with LMPD, adding, “Any possible relationship between McKibben and the residents at 7920 Rainey St. are still being investigated.”