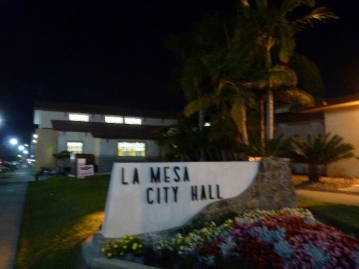 By Miriam Raftery
September 1, 2020 (La Mesa) – The La Mesa Police Department today released details on the brief detention  and handcuffing of an 11-year-old Murray Manor student with Downs Syndrome on August 29 of last year. The child’s parents have filed a lawsuit against the city and the La Mesa Spring-Valley school district, alleging that their son was traumatized.
According to Lt. Gregory Runge with the LMPD, the reporting party indicated that the student, “had removed all of his clothing and was attempting to run away from the campus. The reporting party further related that the student had a history of being aggressive and violent. Staff members were using their bodies to attempt to create a barrier to prevent the student from running farther from campus.”
Computer aided dispatch records indicate officers arrived about five minutes after being called and found the student at the corner of Jackson Drive and El Paso St., a heavily traveled intersection. “The student, who was still nude and weighed approximately 230 pounds, was not complying with directions from the officers or school staff,”  according to Runge.
Lt. Runge indicated that officers, concerned the student would endanger himself by running into the street, was placed in handcuffs but resisted by flailing his arms, so two officers held his arms and a third placed him in handcuffs.  “An item of clothing was used to cover the student while his shorts were located. Officers then assisted school staff in getting his shorts back on.”
The child was subsequently released into his parents’ custody.  “There were no injuries or criminal charges,” Lt. Runge adds. “The student was detained by officers, for his own and others’ safety, for approximately 20 minutes.”
Although the student is named in court records, ECM is not publishing his name since he is a juvenile.
The lawsuit, filed Thursday, claims the sixth grader should never have been allowed to leave the school building and exit the campus gates, and that officers should not have handcuffed the child, who the suit contends was “terrified and cried out for help.”  Attorney Brody McBride stated, “He’s got lasting and significant injuries as a result of this,” 10 News reports.
According to McBride, the boy was born with Down’s Syndrome and is largely non-verbal.
The parents arrived to see their child seated on a curb, crying, surrounded by seven or eight police officers. The suit contends that officers did not immediately comply with a request from the boy’s father to unhandcuff him, doing so only after speaking with the father.
The LMSV school district did not respond to ECM’s request for comment, however the district’s assistant superintendent told 10 News, “I can assure you that our teachers and administrators care deeply about our students with special needs. The district’s policy is not to comment on issues related to pending litigation.”
Mayor Mark Arapostathis, who is also a teacher, did not respond to ECM’s request for comment.
However, Jack Shu, a candidate for La Mesa City Council who has pushed for formation of a citizens oversight panel on policing, questioned why it took a full year and a lawsuit for police to issue a statement on the incident. “The issue of trust and a faster public response when complaints are made still needs to be addressed, adding that this incident needs to be examined to determine which story is correct.  “All this points to the need of an independent police oversight board.  Such a board could find that the officers did an exceptional job, which is just as important to know as if they could have done better.”