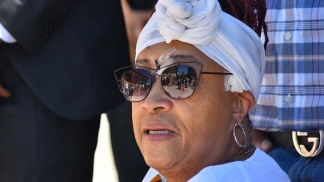 By Ken and Chris Stone, Times of San Diego, a member of the San Diego News Association

Photo:  Leslie Furcron, a 59-year-old grandmother who was injured during a protest in front of the La Mesa Police Department, thanked her hospital caregivers but said she is still very weak and will need nursing care. Photo by Chris Stone

June 11, 2020 (La Mesa) - Leslie Furcron spoke for three minutes outside La Mesa City Hall on Wednesday — her first public remarks since being shot in the face during a La Mesa police station protest. But her lawyer said she was wounded for being heard saying “Murderers.”

Released from Sharp Memorial Hospital on Tuesday, the Lemon Grove resident called herself a law-abiding and God-serving person who had been studying at San Diego City College for a social service work degree.

But she shed little light on the events of May 30, a Saturday when rioting followed her wounding with what her lawyer called a “metal projectile” and a “flying blackjack.” (Police called it a beanbag shot.)

Dante Pride, the lawyer who introduced her and spoke to media afterward, said he had talked to his client, a great-grandmother, about that night.

“But as you can imagine, she can’t remember everything,” Pride said after noting her journey from the police station parking lot by “guardian angel” bystanders to Sharp Grossmont Hospital and then, via Life Flight helicopter, to Sharp Memorial Hospital in Kearny Mesa. She is now blind in her left eye, he said.

Pride said he spoke to at last five witnesses who all said she was taking a drink from a can and threw it on the ground.

“She littered,” he said. “She’s a 59-year-old woman. There’s no way she had the strength or power … to throw a can from where she was [wounded] to all the way where the officer was.”

He said a La Mesa police officer — whose name has been withheld despite demands for his identity — targeted her for what Furcron said.

“She said to the police: ‘You guys are murderers.’ And after she said that, that’s when she was shot (in retaliation),” Pride said after she spoke to media following a slow trip with a walker. (He also apologized for her late arrival — on account of a flat tire.)

Pride said he was considering legal action against La Mesa police to pay for her hospital care and other damages.

He said he didn’t blame the city of La Mesa, which he said was being “held hostage” by the police department.

“This needs to change,” Pride said. “You can’t have investigations where one party can control the entire narrative. La Mesa Police Department released a self-serving timeline of events to try and insinuate that there was something, anything, that Miss Furcron could have done that should have resulted in the injuries that she suffered.”

Pride said nothing exists on camera “anywhere” that shows she made an officer either fear for their life or injured them.

He told reporters he was pursuing a public-records act request to learn more about the incident, which started about 10 minutes after she arrived after 8 p.m.

He said police were “holding all the cards and not showing them to anyone. And that is what we are fighting for. That is what Black Lives Matter means. We don’t have to justify the use of force upon our bodies. It is police who must justify that force.”

In a statement afterward, La Mesa Police Chief Walt Vasquez said he was sincerely thankful that Furcron has been released from the hospital and is able to now heal at home with her family.

“I pray that she has a speedy and full recovery,” he said. “I can assure Ms. Furcron, her family, and the public that this unfortunate incident will be fully investigated, to include an in-depth look at our crowd control practices.”

He added: “The men and women of the La Mesa Police Department work tirelessly to provide quality and professional police services for all members of our
community. Our hope is that we will all come together to heal the wounds, nurture a culture of open communication, and make the City of La Mesa a better and safer place to live.”

In her brief remarks, from a lawn chair, Furcron said:

“My name is Leslie Furcron, and first and foremost I need to thank God for still being up here. And I want to thank all of Grossmont, Sharp Memorial trauma team and [garbled] and Peter and  … all the nurses, all of … everyone that was instrumental in me getting where I needed to get.

“I’m a mother of four children, three living, and a grandmother of 13. I’m a productive member of society. I go to San Diego City College. … That’s changed. Working on a bachelor’s degree as a social service worker. … I’m a law-abiding citizen. And I never had came out there that night for this to be a part of my story. I just want to say thank you. I want to thank my family, thank (all those) instrumental in helping me. That’s all.”

“I’m going to have to have the help to be cared for. … I live here in La Mesa. I’ve been here living in La Mesa or Lemon Grove for three years now. I’ve been going to school since 2014. I’m taking care of my mom. My mom suffers paralysis on her right side. … I’m a God-serving person. I’m a mother and a grandmother. And I’m also a great-grandmother.”

(Registrar of Voters Michael Vu said Thursday that Furcron has a Lemon Grove address, per her voter record.)

The energy, the strength that it takes to walk is very hard for her. Mrs. Furcron is here despite not being able to see out of her left eye. No vision.

[I observed Tuesday night’s] City Council meeting. It’s not the City of La Mesa that’s hiding the ball here. It is the La Mesa Police Department. And this is yet another example of why we need change, why we need something different.

Even the city of La Mesa is being held hostage by the La Mesa Police Department. This needs to change. You can’t have investigations where one party can control the entire narrative. LMPD released a self-serving timeline of events to try and insinuate that there was something, anything, that Miss Furcron could have done that should have resulted in the injuries that she suffered.

We are here to say that is not the case. There is nothing she could have done, there is nothing on camera anywhere that will show that she made an officer of the La Mesa Police Department either fear for their life or injured them.

Also, in that self-serving timeline of events, there’s no indication as to who that watch commander was that allowed them to start firing bullets and these tear gas bombs. There’s no indication as to how many times these things were actually fired. So you see — all we have is La Mesa Police Department holding all the cards and not showing them to anyone. And that is what we are fighting for. That is what Black Lives Matter means. We don’t have to justify the use of force upon our bodies. It is police who must justify that force.