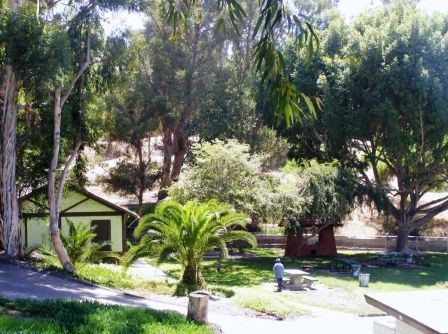 Eucalyptus trees are prone to sudden limb drops, with potentially lethal consequences. So the city plans to replace Eucalyptus with other species as part of a broader park renovation plan.

Numerous deaths in southern California have been documented as a result of eucalyptus limb drops, including a Valley Center man killed in 2020, a woman in Old Town in 2003, and a 4-year-old child who died after a eucalyptus limb fell on her outside the San Diego Zoo in 1983.

Timber from Eucalyptus trees will be recycled and repurposed as site furnishings and natural playground elements at Collier and other city parks. The large Magnolia tree near the old spring house will remain, however.

West Coast Arborists will conduct the work, which requires closure of the park from January 10-14, according to a city press release.

This tree removal work must be completed prior to the start of the bird nesting season on January 15, to avoid delays to the much-anticipated start of construction for the park’s rehabilitation this summer. These trees will be replaced as part of the project.

“For 41 years, the City of La Mesa has earned the designation as a Tree City USA, which underscores our commitment to the urban tree canopy and the crucial role green spaces play in our Climate Action Plan,” said La Mesa City Manager, Greg Humora. “We want to reassure the public that these trees will be replaced, as we look forward to the continued growth of our urban canopy.”

The planned renovation of this neighborhood park is part of a long-term project to improve and update the park based on community input through a master plan adopted in 2013, with additional input gathered in 2018. For the next phase of improvements, the proposed $3.5 million project is being completed with funding allocated from various sources.

Construction is anticipated to begin in the summer of 2022, which will require closing the current park and courts. The project should be completed in late 2023.

More details are available at the project webpage: https://www.cityoflamesa.us/1652/Collier-Park