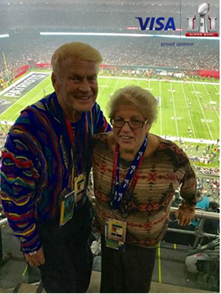 February 14, 2017 (La Mesa) -- Donald and Marilyn Gustavson of La Mesa savored a trip to the Super Bowl in Houston, after Donald was named grand prize winner in the “From Sofa to Stadium” Visa Super Bowl LI Sweepstakes for Union Bank. A Union Bank customer for almost 40 years and a huge football fan, Gustavson was thrilled to win.

“I can’t thank Union Bank enough. It was a dream come true for my wife and me to go to the Super Bowl,” said Gustavson, who played football in high school in New Jersey where his team attained championship status several times. “Football has always been a big part of my life,” he added.

After watching the first half in the stands, Gustavson and his wife were escorted to the field for the half-time show.

“The half-time show with Lady Gaga was spectacular. There’s nothing like the energy on that field,” said Gustavson. “What a great game of football by both teams. Thanks Union Bank and Visa for making this happen.”

“Union Bank joined with Visa to bring our cardholders a truly once in a lifetime experience,” said Brian Milton, Head of Consumer Finance and Payments for Union Bank.  “We were excited to offer this sweepstakes and give our clients a chance to win by using their Union Bank Visa Credit Card.”

The sweepstakes started on August 28, 2016 and ended on November 15, 2016. There was one grand prize winner. To enter automatically, participants used their Union Bank Visa credit card or participants mailed in a hand-written entry form during the promotion period to be entered into the drawing. Winners were selected from a random drawing.  The sweepstakes was open to legal U.S. residents who were at least 18 years of age.