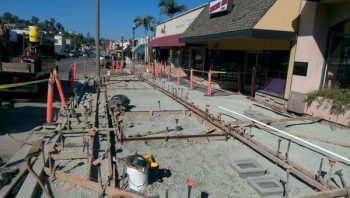 September 29, 2015 (La Mesa)--Several downtown La Mesa restaurants say the city’s Downtown Village Streetscape Improvement Project has taken a much bigger hit on their businesses than anticipated—and the owners aren’t happy about having to shell out more money to get their patio seating back.

While the project that began construction in July of last year is nearly finished, there’s still work to be done, and most restaurants haven’t had their outside patios re-installed in time for this weekend’s big Oktoberfest celebration.

“This has taken a toll on everyone,” said Carol Tolosko, owner of Centifonti’s and Kornichiwa Sushi, both in the Downtown Village area. Tolosko said she supported the improvement project and its goal of making the neighborhood safer and more pedestrian-friendly, but adds, “It’s taken too long a time and it’s affecting everyone’s sales.”

Both her restaurants have lost a great deal of revenue during the past year because many of her customers would rather avoid all the construction impediments and stayed away until the the project is completed, she said.

As of last week, Tolosko still wasn’t sure whether she would be able to replace the outside seating that she had before the project began in time to capitalize on the crowds expected during Oktoberfest, Oct. 3 and 4.

The city is requiring restaurants with patio seating to have a permit and show proof of certain levels of liability insurance coverage before the seating is installed, Tolosko said. 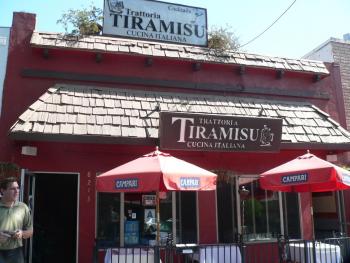 David Chiodo, owner of Tiramisu Tratoria, said he’s hoping to get his patio and railing back, but he’s been told it will cost a lot more to get the higher insurance coverage. (Photo, right, by MIriam Raftery: Tiramisu outdoor patio dining before demolition for Streetscape project)

“They tell me it’s going to cost another $600 to $700 a month, and that’s money I don’t have,” he said. Sales have plummeted so much during the year-plus construction period, Chiodo said he considered selling the business he started some 11 years ago.

He estimated his business has lost between $40,000 to $50,000 in sales due to the construction. And he will likely lose more if he cannot re-install the restaurant’s outdoor seating for Oktoberfest, he said.

“A lot of people think we’re closed, and they haven’t come back,” Chiodo said. “Maybe the city is trying to kill the small guy.”

Greg Humora, La Mesa Director of Public Works, said long before the construction began, the city undertook an extensive public outreach program, contacting all the affected businesses in the neighborhood to let them know how the project would be phased in, and what things the city could do to accommodate the businesses during construction.

“Our intent was to minimize the impacts to businesses as best we could,” Humora said. The work was done in phases that allowed La Mesa Boulevard to remain open throughout the period, and allowed for access to some parking, he said.

City staffers met with most of the business owners to give them more details of the project would be done, and to ask them about their particular needs. It also created a brochure giving more information on the project, and gave periodic updates on the city’s website, he said.

Humora said while the city requires restaurants with outdoor patio seating to have a permit, there is no fee for the permit.

A change in state regulations covering such patios may result is some restaurants having to provide higher liability coverage, but he couldn’t say what the additional cost would be.

“Unfortunately, we live in a very litigious society, and sometimes having $1 million (in liability coverage) just isn’t enough,” he said.

Tolosko said the downtown street improvements were long overdue, especially the added lighting to make patrons, many of whom are elderly, feel safer. While she said the city provided all the relevant information on how the project would be done, the reality is that far more of her customers avoided coming to the neighborhood because they weren’t sure where they would find parking.

Tolosko declined comment on a pending lawsuit she filed against the city in July 2014. The complaint alleges negligence over damages to Centifonti's restaurant floor caused by growing tree roots planted by the city. In the suit, the business claimed city workers visited the restaurant in 2012 when the problem first arose, and advised she file a claim to recoup damages.

The claim, that didn’t specify monetary damages, was filed in October 2012 and was rejected by the city in July 2013, according to the lawsuit.

At least two local eateries, San Filippos and Cosmos Coffee, have closed down in recent weeks, both faulting the lengthy streetscape project at least in part for negatively impacting their businesses.

Similar street improvement projects to La Mesa’s have been done in many other county cities, all intending to attract tourists and local residents to aging and deteriorating downtown sections.

In El Cajon, a similar street improvement project was completed about three years ago, and has spurred increased pedestrian traffic to that city’s core, said Gary Kendrick, an El Cajon councilman.

“It’s been quite a success,” Kendrick said. “For our Friday outdoor concert series, we were seeing crowds of several thousand people.”

He wasn’t sure whether El Cajon’s street improvements resulted in restaurants having to increase their insurance coverage.