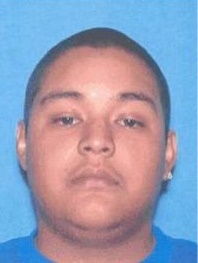 June 21, 2016 (La Mesa) – Freeway memorial signs commemorating murder victim and Sycuan tribal member Xusha Brown Jr. were unveiled today at the La Mesa Police Department.  Brown was shot and killed while in a vehicle on Interstate 8 in La Mesa in the early morning on May 5, 2013.  The driver of the Nissan Maxima, Malcolm Hune, was also injured.

Police have indicated the case is believed to be gang-related although neither Brown nor Hune were known to be involved in any gang. The murder remains unsolved.  Sycuan Chairman Cody Martinez and Sycuan Councilman Xusha Brown,along with District Attorney Bonnie Dumanis and La Mesa Police Chief Walt Vasquez were on hand today to unveil the 2 foot by 3 foot memorial signs that will be placed along Interstate 8 within one mile of where the murder occurred.

Brown, father of the slain youth, stated, “He had a couple drinks and decided to ride home with someone else and obviously he was at the wrong place at the wrong time. He was trying to make the right decision for himself that night,” the Union-Tribune reported.

He added, "Hopefully someday someone will grow up and understand the mistakes that they've made and take responsibility for the things that they've done. That's my goal and my hope."

Sycuan also reaffirmed its commitment to a $100,000 reward leading to the arrest and conviction of the responsible parties.