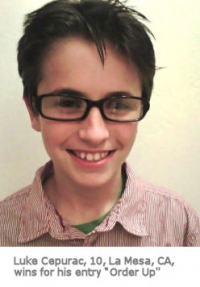 In addition to the awards presented onsite, each first place award winner was asked to name their most inspirational teacher.  Ms. Julie Vlosky, Gaurov’s 4th grade teacher at the Hart Magnet School, received a $250 award for the nomination.  Mrs. Jennifer Schneider, Sophi’s mom, who is also a teacher, was named for being Sophi’s inspiration for entering the contest.

Jim Pressman noted, “It’s clear that a tremendous amount of hard work and creativity went into all of the MASTERMIND Braintwister Challenge entries, and every student who submitted should be commended.  However, the winning entries stood out because they incorporated the skills learned in MASTERMIND by challenging players to solve and earn points as they deciphered clues.”

From October 1, 2012 until January 7, 2013 kids ages 7 through 12 nationwide were invited to enter their own braintwisters in categories such as puzzles, word problems, riddles and games with solutions.  More than 150 submissions were received.

The MASTERMIND Braintwister Challenge was part of a larger MASTERMIND education initiative.  As part of that program, more than 10,000 educators received a free MASTERMIND game to enrich classroom learning.  Educators and parents who already have the game can also download MASTERMIND educational activities, including an interactive white board activity, free of charge at www.MASTERMIND-education.com.

MASTERMIND is a two-player game that puts the Codemaker against the Codebreaker.  The Codemaker secretly places any four Code Pegs in the shielded code area. The Codebreaker puts down a line of color pegs and tries to uncover the secret code.  The game is appropriate for those ages 8 and up.