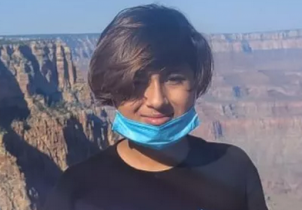 November 28, 2021 (San Diego’s East County) – Angel Gaspar Gallegos, 12, a student at Parkway Middle School in La Mesa, was killed on Thanksgiving night by a bullet while playing with cousins in his aunt’s backyard in the Skyline neighborhood.

The tragedy occurred in the 7400 block of Cahill Drive. San Diego Fire & Rescue responded to render aid to the boy, who suffered trauma to his upper body. He was rushed to UCSD Medical Center, where he died.  San Diego Police Department homicide officers are investigating.

The loss is doubly tragic for his parents, who lost an infant daughter 14 years ago; she died during heart surgery, according to the boy’s aunt, Maria Gaspar, the San Diego Union-Tribune reports.  The family has two other children, Gabriel and Brianna, Angel’s younger siblings.

“We were supposed to be celebrating Thanksgiving like everyone else but this incident changed all our lives forever," Jose Casillas, the boy’s uncle, told NBC San Diego.

There are currently no suspects in the deadly shooting.  Casillas implored the public to come forward with information on who fired the fatal shots. “I don't even think this was intentional, there's no way but we do need to find who did it because intentional or not they devastated my family,” he said.

His family has set up a GoFundMe account to help pay for funeral costs and hospital expenses. You can donate here.