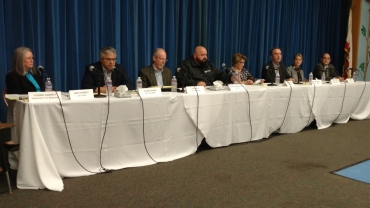 In this part of La Mesa the subject of group-homes was very much on the minds of nearby residents.  The concentration of group-homes in this neighborhood is five times the normal number.

“There are 11 such homes in this part of La Mesa.  Imagine if you had eleven 7-11 stores in your neighborhood,” said Mercy Graef who was quick to point out that these homes are not voluntary. "they are ‘transitional living’ homes for recent parolees, so-called ‘sober living’ and a place for mentally or emotionally impaired individuals.”  Graef emphasized that these “homes” are businesses making hundreds of dollars per tenant per month.

The City Council, starting with the Mayor, expressed deep concern.  Mayor Arapostathis said “I know you must feel like you are rolling a boulder uphill but we are with you and we are doing everything we can to fix this problem.”

Recently, one citizen related, there was a man who had a psychotic episode in an adjacent backyard.  The man attempted suicide but was prevented by police.

Graef said she has lived here more than 40 years, “but now I don’t feel safe walking down the street in my own neighborhood.” 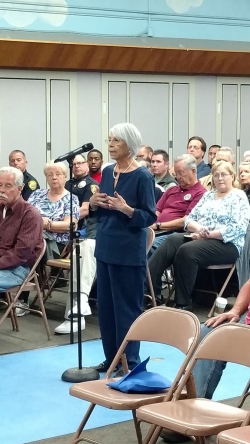 City Attorney Glen Sabine outlined the problem from a legal standpoint.  It is complicated, filled with holes and prone to abuse.  The only sure way to fix the problem for good will require legislation from Sacramento.  Sabine said La Mesa is partnering with other cities which have the same problem to make their complaint known in the state legislature.  There is a federal case pending on this matter and the City Attorney said it would be prudent to wait for the outcome before taking local action.

Vice Mayor Bill Baber has been working with the community to get some sort of measure enacted that would provide some immediate remedy. He told the crowd, “We cannot wait for legislation which could take years.”  Baber has been to Sacramento to personally present the community’s grievance.  He thanked the local citizens who accompanied him to the state capitol.

City Manager Dave Witt called the situation a “failed social engineering experiment.”  He added, “State-run facilities have been closed and local ‘group homes’ were to be a better solution.”

Our State Representative Shirley Weber is also engaged in this struggle to balance the need for Transitional Housing and the concerns of the community.

Councilmember Ruth Sterling expressed her deepest sympathy and charged the City Attorney to “find a loophole.”  The Mayor chimed in to the City Attorney, “Fix this, Glen.”  The crowd laughed in agreement.

Vice Mayor Baber asked if special attention by law enforcement was needed.  Police Chief Walt Vasquez responded, “We are keeping a close eye on the homes and we are in constant contact with the parole board.”

However the City Manager said the answer could be in code compliance which must be preceded by legislation.

The question of a new library for La Mesa comes up at nearly every City Council meeting. The City Attorney said that since 2010, property entanglements have frustrated efforts to build the new library but work is ongoing.  Sabine announced several new initiatives for the City, including several park improvements and a Boys and Girls Club through a joint use park proposal between La Mesa and Spring Valley.

Assistant City Manager Yvonne Garret detailed the updated website for the City, which includes more interactive features making it more user-friendly.  “For instance citizens will be able to report pot holes and include a photo.”  The City now has a Facebook page, other social media and most importantly the City’s website will be “mobile device friendly.”  Ms. Garret also introduced the new branding and logo for the City which will be carried across all media platforms.

One local La Mesa resident said the town hall meeting restored his confidence in government, “The City listened to us and we heard them speak.  This is good.”