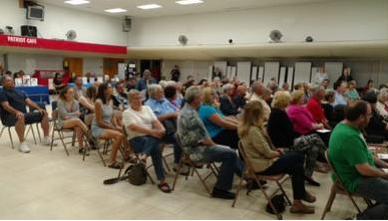 February 18, 20016 (La Mesa) -- The first La Mesa Town Hall event of 2016 exposed tensions brewing in the relationship between citizens of La Mesa and the City Council.  These open forum sessions aim to give citizens a forum to share “ideas, comments and opinions on issues in their neighborhood and throughout the City,” according to the City’s website. 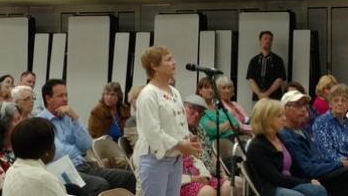 On Tuesday, residents gave the Council an earful.  Six out of nine citizen speakers complained about the Depot Springs Beer Company that was, as one local said “already too far along to stop.”  Locals have been complaining long and loud about the proposed 900-seat music and beer venue that has no cover charge in a residential neighborhood near schools and churches, directly across the street from Parkway Middle School, site of the community forum, as well as a park and a YMCA.

With its proximity to SDSU and Grossmont College students, residents asked pointed questions: Where will patrons park? What about the noise? What sort of neighborhood changes comes with a rock and roll venue in a brewery? 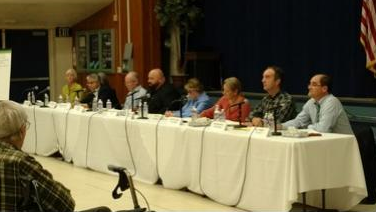 Mr. Witt explained that the Depot Springs Beer Company has a conditional use permit and if agreed upon limitations are not met the place will be closed down.  So the question was asked “How many parking spaces will be provided and where will they be located?”  Mr. Witt dodged the question stating that, “property owners have rights and neighbors have rights.”  When pressed for a number,  neither Mayor Arapostathis nor City Manager Witt had an answer, except “The owner is working on it.” 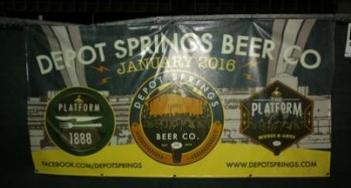 According to an article in the Reader, owner Aaron Dean said, “We are 100 percent fully funded. We got approved for all the space we wanted and permission for everything we wanted to do.”

Dean is building the 7000-square-foot Depot Springs Beer Company and the adjacent Platform 1888, a 25,000-square-foot full-service restaurant and outdoor venue on Fletcher Parkway near Dallas Street.  He said the venue will hold approximately 900, based on a 300-capacity restaurant and 600 for the amphitheater. 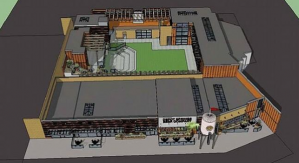 Dean said rock, jazz, country, acoustic, and comedy artists will perform, even though there is no cover charge. “We would probably be cautious about heavy metal and punk. But if Metallica wanted to come here and play their acoustic album, we’d be happy to have them.”

City Manager Witt said that it would not be a “little Woodstock” and that the owner had exaggerated the extent of the project and was “scaling back,” but would not elaborate.

Vice Mayor Bill Baber pressed the City Manager on the parking issue.  Still no parking space number was provided.  City Manager staff answered that a traffic study had been done as part of the Environmental Impact Report and that compliance was “in progress.”  Pressed further, the City Manager stated plainly that if the parking provisions were not met, “The permit would be rescinded.” 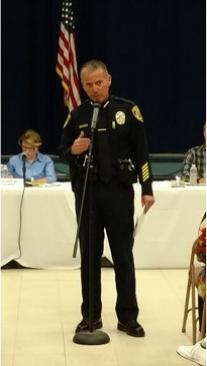 Council Member Ruth Sterling suggested that the citizens of La Mesa were unaware of the appeals process recently put in place which would have put the proposed project on the City Council Meeting Agenda for public discussion and an up or down vote.  Council Member Sterling’s remarks drew loud applause from the 115 Town Hall attenders.  The Appeals Process requires an application and a $50.00 dollar fee.

In other business, citizen Brad Broswell asked, “In light of the attack in San Bernardino, did the La Mesa Police have a means to detect and identify threats within our region?”

Newly sworn-in Police Chief Walter Vasquez, in his first time speaking at a town hall, said, “La Mesa Police have a ‘crimes studies unit’ that coordinates with the San Diego County Sherriff, California State law enforcement and Federal Law Agencies.”  He pointed out that Sherriff Gore is a former head of the FBI.   Chief Vasquez meets monthly with the chiefs of local, state and federal law enforcement agencies for assessments and coordination.

In a related question, Mr. Broswell added, “Does La Mesa have the law enforcement resources to enforce the recently passed Proposition 47?”

Broswell told ECM that Prop 47 would increase the workload of the police department because it created a revolving door for repeat criminals now that the ‘three strikes’ provisions of the law have been modified.   Chief Vasquez’ acknowledged the challenge and said the La Mesa police were prepared.

Pauli Cable said that she likes to walk her dog on Mount Helix.  “Lately the pot smokers have gotten very ‘comfortable’ on Mount Helix.  Even to the point that they are openly selling drugs.”

Chief Vasquez addressed her concerns by noting that Mount Helix is in unincorporated territory and is the jurisdiction of the County’s Sherriff, adding that for a non-emergency the incident would be prioritized by the Sherriff.   The City of La Mesa holds at least two Town Hall meetings every year.

There will be another town hall tonight at the Maryland Avenue Elementary School auditorium, located at 5400 Maryland Ave., at 6:30 p.m.

I am completely against this plan, which promises to disrupt the community with obvious noise (till midnight!), parking issues, and alcohol impaired drivers on a street (Fletcher Pkwy) where numerous people have been killed already, including two school children in separate incidents in the past decade. I am a neighbor in the immediate area who was never notified, and none of my immediate neighbors were, either. It is never too late to stop something that is just plain wrong for the neighborhood. Get your kicks somewhere else, in an industrial commercial zone. This is residential and we deserve to sleep and enjoy peace on our properties and safe streets.

In the spirit of fairness, since the owner of Depot Springs Beer wasn't at the community meeting, we sat down with him this week to hear his vision of this project, which clearly does have many supporters in the community as well as some neighbors with concerns.

Watch for our interview on this fascinating new project, which does indeed have many changes, coming soon on East County Magazine in the next few days!

I agree with the previous commenters that we need more places like this in La Mesa. I don't live within walking distance but this would be the type of place my family and I would patronize and likely enjoy, especially if it's a place to relax with my kids in an environment conducive to their safety. That being said, I think concerns about noise are valid, and not just about the level heard outside of the restaurant/venue. I also thinking parking is a valid concern, especially in that parking lot. I used to go the Michael's store there and the parking lot was almost always full, mostly with folks going into Souplantation. Parking will be an issue. While the Uber suggestion is a step in the right direction, I have two kids, one of whom is in a car seat (not booster) so that chances of coming to this location via Uber, it is only a minor way of solving a genuine problem. I am sure there are plenty of other folks who would drive and need parking. People will hesitate to go there for dinner if they know parking will be a hassle. Once we see the benefits of more places like this in La Mesa, I think the people who live here will become more open to them. The problem is, that developers and incoming business will promise one thing, and then fail to deliver, thereby adding to residents' existing hesitation and suspicion.
Aaron, Just want to let you know that there are many people on your side eagerly awaiting Depot Springs opening. As the high cost of housing has pushed many former San Diegans to the suburbs such as La Mesa there is a critical need for authentic local places to enjoy music and meet with friends for good food and drinks. I'm sure I'm not alone in saying that I'm tired of having to leave town because I'm not interested in spending my time or money at the endless corporate chains that dot the landscape in La Mesa. There will always be a vocal group of "Not In My Backyard" conformists who are happy with the status quo. They should realize that establishments like yours will actually improve La Mesa's tax base and help evolve La Mesa's sleepy cultural wasteland image. The times they are a changing. I'll be there when you open!
Well stated
Thank you for taking the time to comment, Mr. Dean. Although I am sad that I lost my favorite Thai restaurant, I'm excited for the event venue. This sleepy town needs some arts and better food than boring chains. Regarding parking: this is a beer depot, with alcohol being served, I would highly recommend people walk or take Uber. Perhaps you can promote that? If you are local, why are you driving? Regarding being by a church and school: how is that important? Bands won't be during school or church hours. The noise wouldn't affect me personally, but I can see that would be a great concern to very close residents. A valid concern. I think the arts enrich lives and I look forward to this being a family venue where I can expose my child to live music.
Dear Community, Many things about are project have changed. We decreased the number of people our project would hold and have been very clear about our intentions. I wish, as the owner, I could have attended the Town Hall Meeting. We have spent a great deal of time and effort making sure our project only enhances the community. My family has been part of the La Mesa Community since 1959 when my Grandfather purchased a part of the shopping center. I promise that we will not create a nuisance in the neighborhood. We will be family oriented and focus on amazing food, great beer and really wonderful service. Our entertainment will be focussed with families in mind. We have an area for specifically for children. We are not a concert venue. We are not going to have 900 people at the project. Being part of the community is very important to me and my wonderful team. I will be posting a time and date in the near future for the community to come ask me questions and learn more about what we are doing. Thank you to the neighbors who have been so supportive of our project. And for those who have concerns we have a conditional use permit that restricts noise levels, times and more. I promise we will do everything to show you how we are a benefit to this fantastic community and not a burden. Thank you for giving us a chance...Aaron Dean, Owner

Please do not portray the neighborhood as supporting your financial venture. It is absolutely upsetting to 90% of the many people I have talked to, with a petition of 100 signatures gathered against this plan. It was kept way under the radar of the neighborhood, which consists of El Cajon and La Mesa residents, being right on the border. The mayor, city staff, and city council are negligent in supporting this project over the objections of the community. At election time they will be voted out, as this is nothing but a slap in the face to the La Mesa voters and residents. The El Cajon residents weren't even considered, as La Mesa ploughed on with this project. To pretend to care about the residents while bringing in this type of facility into a neighborhood like ours is really ridiculous. It is all about the money - of course. This is an example of what Bernie Sanders has been telling us. Corporations and the wealthy getting what they want at our expense.