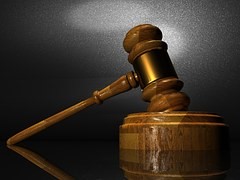 August 17, 2016 (La Mesa) — A lawsuit alleges that the Travelodge hotel in La Mesa discriminated against a deaf woman traveler, due to her service dog.

The plaintiff, Naomi Sheneman, is represented by Eisenberg & Baum Law Center for the Deaf and Hard of Hearing. A statement issued by the New York law firm states, “"It is disturbing in 2016 that people could actually be refused access to hotels on basis of their deafness. Our client has brought this lawsuit not only to redress the discrimination that already occurred, but to ensure that any other Deaf individuals that seek access to hotels with service animals will not be discriminated against. There is no excuse that Travelodge cannot be accessible to Deaf individuals with service animals. Their lack of awareness for the need to properly accommodate the Deaf community cannot continue."

Sheneman communicates primarily in American Sign Language and is a registered interpreter for the deaf.  Her hearing dog, Chocolate, alerts her to noises.

According to the suit, “After Naomi asserted her civil rights by refusing to sign a discriminatory damage policy form pertaining to guests with animals, Travelodge told her that she was no longer welcome at the hotel, and she was forced to leave.”

The suit claims that Sheneman arrived to check at the Travelodge, located at 7911 University Avenue, on March 8th.  She had prepaid the $185 bill online at Expedia.com.  However, front desk staff “appeared obviously displeased to see the dog” which had on a service uniform.  The front desk clerk allegedly referred Ms. Sheneman to a sign posted near the desk reading "No Pets Allowed."

Sheneman explained that Chocolate was a service dog and the clerk began the check-in process. The clerk gave Sheneman a form asking for a damage deposit, which she paid.

But Sheneman objected when given a second form titled “Damage Policy covering an Animal in the Room” that listed charges for damage by a guest’s animal.

Sheneman accessed the Americans with Disabilities Act website and showed the clerk the following:

Can I charge a maintenance or cleaning fee for customers who bring service animals into my business?

A: No. Neither a deposit nor a surcharge may be imposed on an individual with a disability as a condition to allowing a service animal to accompany the individual with a disability, even if deposits are routinely required for pets. However, a public accommodation may charge its customers with disabilities if a service animal causes damage so long as it is the regular practice of the entity to charge non-disabled customers for the same types of damages.

The clerk appeared to call a manager on the phone, then printed and showed Sheneman the same language from the ADA site and said she would be responsible for any damage caused by her dog.

Sheneman said she believed that the first damage deposit already addressed her responsibility and that the second form was discriminatory due to her service animal.  She refused to sign the form then said she wanted to keep the second deposit form to investigate if it was discriminatory. But when she folded the form to put it in her bag, the suit contends, the clerk grabbed the form and tore it, though Sheneman managed to keep most of the form.

The clerk then told Sheneman she could not stay at Travelodge and refused to give her a refund. Shenenam stayed at another hotel.  After several calls to Expedia, Travelodge offered a partial refund but eventually refunded the amount in full.

The plaintiff, a resident of Rochester New York, travels to San Diego frequently for work and indicates she wants to stay at the Travelodge in the future. The suit seeks monetary damages and an injunction requiring Travelodge to implement a policy prohibiting future discrimination against deaf or hard of hearing people, as well as training of all personnel.

And people do not understand that because you can't see the disability that it still exists. Hopefully Travelodge will learn to respect this disability after the unfortunately needed lawsuit.