Times have changed since La Mesa became a city in 1912--the year the Titanic sunk, Teddy Roosevelt ran as a Bull Moose, and silent movies were the hot pop culture crazes. 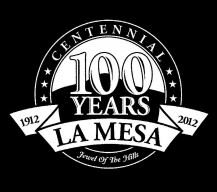 May 24, 2010 (La Mesa) – The jewel of the hills will be a century old in 2012—and city leaders are gearing up to celebrate La Mesa’s history and culture through exhibits, education venues, institutional presentations and community events. (Get ready to party hearty!)

How much do you know about La Mesa's history and how times have changed in the past 100 years?

Once a grazing land for cattle and sheep as part of a Spanish land grant, La Mesa had its roots in the railroad expansion and construction of a water flume from Cuyamaca to San Diego, which sparked the region's early development.  By the early 1900s, an artists' colony had been established on Mt. Helix and  the sleepy town of La Mesa had become a mecca for the silent movie-making industry. 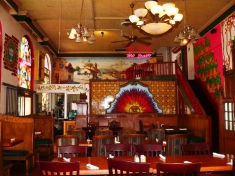 At tomorrow night’s City Council meeting, which begins at 6 p.m. in Council Chambers, members will be asked to approve a Centennial logo (shown) and pursue funding for a Centennial Legacy Project to “leave a legacy for future generations.” Centennial goals include creating opportunities for community groups, businesses and tourism associations to participate and to foster civic pride and prosperity through Centennial promotional activities.

The committee will recommend a downtown location to feature a community clock and/or piece of art, also showcasing all Centennial major donors. In addition, Council will be asked to approve a fiscal

sponsorship agreement between La Mesa Parks and Recreation Foundation and the City of La Mesa.

Times have changed since  La Mesa became a city a century ago. 1912 was the year the Titanic sunk, the first women flew solo across the English channel, the Republic of China was established,  New Mexico and Arizona were admitted as the 47th and 48th states of the Union.

British polar explorers reached the South Pole, the Mayor of

Ex-president Theodore Roosevelt formed the Bull  Moose party and was later shot by a saloon keeper while campaigning in Milwaukee--but was saved by a folded speech in his breast pocket that slowed the bullet.   Woodrow Wilson won the presidency in a landslide and the Mexican revolution occurred.  The Boston Red Sox beat the New York Giants in what is considered one of the greatest World Series games ever played. 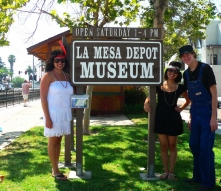 Art Madrid, first elected to the City Council in 1981, became Mayor in 1990 and has been serving ever since.  He's making plans to usher in the city's second century in 2012--when he will have held public office for nearly a third of La Mesa's 100-year history.

At this rate, Madrid may be on pace to make some history of his own.  In 2012, he'll surpass the tenure of political boss Richard J. Daley of Chicago, who served for 21 years as perhaps  the longest-serving big-city mayor in America.

La Mesa's long-standing public servant has a ways to go, though, to beat the record of America's longest-serving Mayor.  Hilmar Moore, 89, was first elected Mayor of Richmond, Texas in September 22, 1949--over 60 years ago--and has been serving ever since.