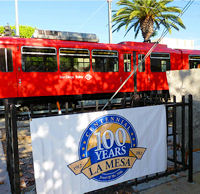 The celebration doesn’t end there, it will continue with a special City Council meeting at 4:00pm in the Council Chambers at 8130 Allison Avenue. This date was selected for the kickoff because one hundred years to the day the first City Council (called Board of Trustees) met to elect the city’s leadership. The meeting will include a presentation of proclamations from government officials and dignitaries. Immediately following the council meeting will be a reception at 5:00pm, outside the council chambers.

The final event commemorating the centennial kickoff will take place on February 18at 7a.m. La Mesa residents and friends are invited to participate in “A Century of Smiles” to create a human 100 on the top floor of the parking structure at Grossmont Center.  The first three hundred participants will receive a free t-shirt. An aerial photograph will be taken of everyone present formed in the number “100”. This event is sponsored by Grossmont Center and Sharp Grossmont Hospital, KSON Radio and Diane Wilson.
To keep updated on the yearlong celebration visit www.cityoflamesa100.com.