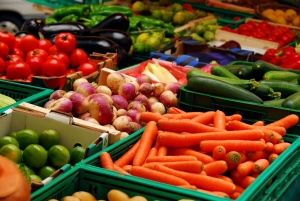 November 1, 2014 (La Mesa)--On the first Friday of November, the La Mesa Village Farmers’ Market will start operating on a “winter hours” schedule, running from 1:00 p.m. to 5:00 p.m.  The venerable and quaint year-round farmers market, which has been sponsored by the City of La Mesa for over 20 years, typically operates from 2:00 p.m. to 6:00 p.m. In winter these hours have the market starting in sunshine, transitioning through dusk, and ending in darkness, which must be illuminated by cumbersome portable lighting fixtures.

Many vendors lamented slow sales after sundown and asked the City to consider revising the hours.  In April, the City surveyed the vendors on the idea of starting and ending the market one hour earlier starting in November and extending through the following February.  The idea was met with a resounding “Yes!” from the vendors and the City agreed to implement the new winter hours.  In March of 2015, the market will return to its 2:00 p.m. to 6:00 p.m. schedule.