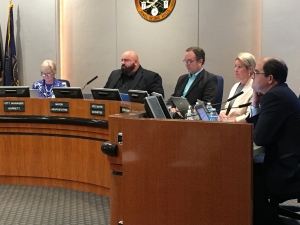 May 24, 2017 (La Mesa) – The 25th anniversary season of the La Mesa Classic Car Show will go on.  Council voted 3-0 last night to authorize a permit for the show to be managed by the new La Mesa Village Association, despite concerns over the LMVA’s decision to drop long-time popular  DJ Jack Leary, aka “Jumpin’ Jack Flash.”

But Council denied a request by the La Mesa Village Association seeking a waiver from a cost recovery requirement to cover police costs provided by the city.  Council members also voiced concerns over the last-minute nature of the permit request, which allowed no time to postpone or make changes without delaying or canceling the event.

Councilman Guy McWhirter recused himself from the vote due to a conflict of interest and Councilman Colin Parent was absent, meaning the measure needed all three remaining votes to pass.

The show will be expanded to 14 Thursday nights, running from June 1 through August 31, according to the LMVA website and city application.

The city had been searching for a new downtown partner for this and other events since the former La Mesa Village Merchants Association, facing financial troubles, failed to repay approximately $40,000 owed to the city for cost recovery related to events.  The debt was turned over to a collection agency and has never been repaid.

Lyn Dedmon with the new group, LMVA, spoke in favor of issuing the permit for LMVA to manage the event. The permit also authorizes some street closures. 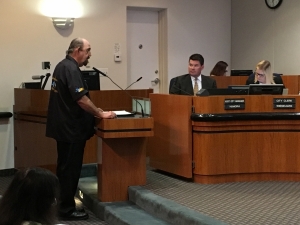 Leary (photo, right)  told Council he’s been involved in most of the city’s last 24 car shows. Despite contacting the merchants’ group early this year and meeting with its president, Aaron Dean, to present his proposal, he received no response to his follow-up efforts until May, when another officer called to notify him that the LMVA would be “going in a different direction” with new entertainment—and Jumpin’ Jack Flash would not be included.

Leary blasted the LMVA. “They’ve done absolutely nothing to promote the car shows this year,” he said.  Leary said there had never been any complaints about his entertainment or past management of the car show.  “I do not hold the city of La Mesa responsible for this fiasco,” he said, “but there is zero media.”

Then he added, “I’m proposing you give the car show to me.”

Roz Oserin with the LMVA told council, “We have not yet had an opportunity to raise a lot of money” and asked the city to waive a staff recommendation for the city to recover $4,598.16 for a police office to provide security “so that we can put it on.”  The merchants group will supplement that with private security officers which can include volunteers.

Katie Halrin defended the LMVA’s decision to drop Jumpin’ Jack Flash.  She said they’ve asked around and “people wanted change.”  She added, “We have another DJ we’re working with.”  A stage will have ‘50s and ‘60s music.  She said the LMVA is also excited to have Rockabilly San Diego as DJ.

As for concerns raised, she told Council members, “Just have faith that change will be positive.”

Mayor Mark Arapostathis noted that Council had decided to get “out of the event planning process” so even if they disagreed with decisions made on entertainment, the vote should be based on granting access to public streets, not choice of DJs.  He noted that last year, after the old group defaulted on its debt leaving the city "without a chair when the music stopped," the city stepped in at the last minute to get sponsors for the car show.

He noted, “This group is not the same as before.”  He voiced confidence that the new group will raise, the $4,598.16 but added, “I also think we should move cautiously.” 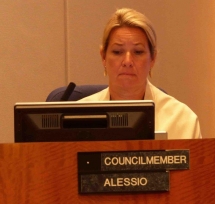 Vice Mayor Kristine Alessio (photo, left) said she was “egregiously disappointed” that the new LMVA dropped Jumpin' Jack Flash, adding that the move would disappoint "car people" as well.  “I cautiously approved this…with the understanding that they should involved Mr.  Leary,” she said of a prior Council action authorizing the LMVA to move forward on managing the show.” Alessio added, “I have classic cars..I spent my whole life at the Cajon Speedway.”  She also voiced concerns over cost recovery.

Councilman Bill Baber voiced frustration at being asked at the last Council meeting before the event, noting that if Council didn’t approve the last-minute request, the show would be delayed or cancelled.  He noted it was an “odd time” to be getting such a request for a 25th anniversary event.

He also voiced dismay over the LMVA telling the city “Everything is together but oh, we want cost recovery….I’m uncomfortable voting for this, but feel like we have no other option.”

The Mayor noted that the Council’s subcommittee did endorse issuing the permit, but “not the inner workings of who will do music.”  He again voiced confidence that “all of the minds in the business community” could raise the money to repay the city.

Alessio asked why, since the LMVA applied for the permit in February, it had taken so long to get onto the Council’s agenda.

Halrin said “We’ve been asking to be on this agenda for some time,” she assured, adding, "The merchants will not fail…This will be unlike any car show that you’ve had.”  She voiced confidence that the city would be repaid.

Baber pressed, “My question was why did they ask to waive cost recovery? We ask a council voted for cost recovery.”

Alessio again asked, “They submitted in February and there was no staff report until May. What on earth took so long?”

City Manager Yvonne Garrett explained that it took time since they were working with a new group that hadn’t done this process before, making sure they had insurance and met other requirements. 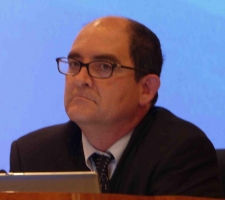 Baber (photo, right) said to the Mayor, “As a process geek, we have to work with our subcommittees, so I’m going to stick with you on this…but this is not the way we want to do so in the future.”

Baber summed up that the Council was faced with two sets of values – one held by those seeking change, the other reflecting La Mesa’s rich history.

“Someone participated for 24 or 25 years and they’re out. That just doesn’t feel right,” he said, reiterating that it didn’t inspire confidence to hear the LMVA asking for a waiver of cost recovery.

The Mayor concluded, “We’re either in or we’re out…I’m not saying we agree with everything.”

Baber told the Mayor, “You put the time in, and I’m backing you.”

As for the waiver request, the Mayor said, “It doesn’t hurt to ask,” but added, “the answer can be `no.’”

Mayor Arapostathis added that Holiday in the Village was “a success” in drawing people to the village, if not a financial success.  He noted that events are important to help the economy thrive.

“As the merchants go, so does the Downtown La Mesa village go.  Guy McWhirter and I were at all the events, and I’m confident this group will be able to produce.”

The Mayor encouraged anyone dissatisfied with changes to “go into stores and share” with merchants in the new association.

The Mayor mad e a motion to accept, with the staff recommendations that included cost recovery, and all three members present approved the motion.

Jumpin’ Jack Flash, a look of dejection on his face, disappeared wordlessly into the night.

Aaron Dean, president of the La Mesa Village Association, spoke with ECM this morning and said the decision to drop the long-time DJ "has nothing to do with him. The goal of the La Mesa Village Association is to put on events to benefit not only the residents around the village, but the merchants. ..With the changes, new restuarants, new retail and enegy since the streets got redone, the car show needs new energy, too.'

Dean said in recognition of Leary/Jumpin' Jack Flash providing music for the shows for many years,  "The association plans on picking one of the days to honor Jack for his many years of service. We'll be reaching out to him over the next 24 to 48 hours."

He voiced confidence that his organization will make the car shows a success and also help the city meet its goal of getting out of the event business.  "We are not the old merchant association. We love the fact that we have a great relationship with the city, and we will continue to have one," Dean pledged.