2 CONFLICTING RECOMMENDATIONS MADE TO CPUC 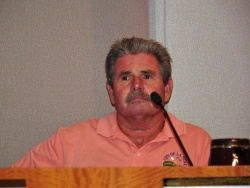 August 13, 2009 (La Mesa)—“We are here because the County has not done a damn thing to protect the people in the backcountry,” La Mesa Mayor Art Madrid said at a La Mesa City Council meeting on Tuesday. Council voted 4 to 1 to draft a letter supporting its Fire Chief in calling for the California Public Utilities Commission to approve San Diego Gas & Electric’s controversial proposal to shut off power when five key conditions for fire risk exist.  Councilman David Allen, a firefighter (photo), also criticized the County for having no fire department.

“Eighteen districts fight fires for the County of San Diego,” he said, adding that one day earlier, the County sent those districts a letter asking for even more resources. “They’re providing approval of developments in the backcountry without services, while we continue to provide the fire protection,” he said. “It’s time they provide and pay for services.”

An SDG&E spokesman testified that shutting off power is necessary to prevent castrophic fires. He also revealed that a PUC commissioner has recommended approval of the shut-off, provided SDG&E consults with CAL-Fire and other officials. However an administrative law judge has issued a conflicting opinion, recommending that the shut-off plan be denied outright.

Several La Mesa Council members expressed concern over SDG&E’s efforts to amend Rule 14, which would exempt the utility from liability for deaths, injuries or damage caused by shutting off power during dry, windy conditions. The vast majority of wildfires have been caused by sources other than power lines, but SDG&E lines have been blamed for causing some of the most devastating fires in state history.

The County Fire Chief’s association, which has 53 members, voted 13 to 7 to support the measure, with the majority of members absent or not voting. “I agree with Chief Augie Ghio and the fire chiefs that something needs to be done,” said La Mesa Fire Chief David Burk. “It’s very costly to extinguish those fires. Prevention is less costly than suppression.”

Councilman Ernest Ewin, who voted to support the shut-off plan, spoke with East County Magazine following the meeting.  "As one who remembers the Laguna Fire, the rapid spread of the Cedar Fire, I am concerned about how quickly we can and do deploy assets to fight the fires that start away from the incorporated areas," he said.  "For me, it is supporting the fire fighting professionals-getting politics out of the way."

Councilwoman Ruth Sterling voted against the measure. “It’s the lifeline,” she said of electrical communications that provide emergency information including evacuation notices. “It would be a horrible mistake to discontinue electricity in times when it is most needed.”

Citizens of La Mesa and backcountry communities testified against the measure. “Water districts will require 39 generators to assure critical pump systems will work, but SDG&E is only providing six,” said Kristen Kjaero of La Mesa. Kjaero displayed charts indicating that during the 2007 fires, 515,000 people were evacuated through reverse 911 calls and 211 San Diego answered 109,000 calls. In addition, 10 million visits were registered to www.sdcountyemergency.com. Without power, people could not use the Internet and plug-in phones would not work.

East County Magazine editor Miriam Raftery testified that ECM’s emergency e-mail alert service would not reach up to 60,000 people in the blacked-out areas. Raftery, who has covered wildfires in the backcountry for over 25 years, said having power on saves lives, citing the example of ECM publisher Mark Hanson, who spoke with a 911 operator in the middle of the night and helped alert neighbors when fire jumped across a lake in a Lakeside canyon.

Milton Cyphert, cofounder of the East County Community Action Coalition, called the SDG&E proposal a “Trojan horse plan” designed to protect SDG&E from liability. “You say you fight fires for us in the backcountry,” he noted. “Once we have no warning that fire is coming, you can shift that job to going and collecting the bodies.”

Leon Thompson of Santee, business manager for East County Magazine, said during the last fires, his terminally-ill wife relied on oxygen and could not breathe if power was shut off. “We live in a condo. We can’t open our garage doors from the outside if there’s no power,” he said, asking how he could have evacuated or taken his wife to a hospital without access to a car.

Councilmembers and the Mayor blasted County Supervisors for failing to use Proposition 172 funds to improve fire protection. Prop 172 was sold to the voters with ads pushing the need for protection against wildfires. But in San Diego County, all funds from the measure were allocated to law enforcement instead.

Burk said some progress has been made to improve fire protection, notably two rotary source aircraft with night-flying capabilities.

But the Mayor and three Councilmembers believe far more should be done—and hope their votes will send a strong message to County Supervisors that stronger fire protection is needed for the San Diego County’s fire-prone backcountry regions.

Madrid concluded, “Doing nothing is not an option.”