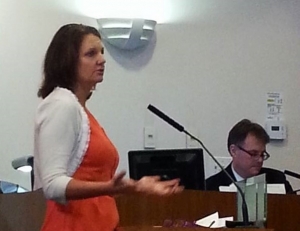 June 8, 2015 (La Mesa)--On Wednesday, June 3, concerned citizens came together at a hearing of the La Mesa Planning Commission to press for a stronger Climate Action Plan (CAP). The hearing proved a reminder of what ordinary citizens working together can achieve.

California’s cities are creating Climate Action Plans, following executive orders from Governor Brown and ex-Governor Schwartzenegger to comply with state targets for reducing greenhouse-gas emissions pursuant to the 2006 Global Warming Solutions Act (AB32). Citizens at the hearing noted that La Mesa’s draft CAP includes no fixed timelines or mechanisms to quantify reduced emissions, and relies largely on promoting voluntary measures such as installation of solar power by individuals and businesses.

Nicole Capretz,Executive Director of Climate Action Campaign, who developed the City of San Diego’s highly praised CAP, pointed out that the La Mesa draft-CAP’s lack of measurable, enforceable provisions and timeline for implementation renders the city vulnerable to expensive and time-wasting legal challenges of its CAP.

Volunteers from SanDiego350, a grassroots non-profit with the mission of combating climate change, added that La Mesa could learn from the legal troubles of San Diego County and SANDAG, who were sued in court and lost because of the inadequacies of their CAP.  They urged the Planning Commission to craft a CAP that would not siphon taxpayer dollars away from services and would be a genuine effort to reduce greenhouse gas emissions.

La Mesan Angela Deegan encouraged the commissioners to aim for 100 percent clean energy by offering Community Choice Energy (CCE).  CCE would allow the City of La Mesa to procure electricity generated from renewable sources and deliver it through existing transmission lines.  Community residents and businesses would have the choice of buying electricity from CCE or from the utility.  Deegan emphasized that with CCE La Mesa can achieve higher greenhouse gas reduction goals and also provide more competition in the local energy market and giving consumers a choice.

Masada Disenhouse, co-founder of SanDiego350, testified that Governor Brown has issued a new executive order that requires state greenhouse gas emissions to decline to 40 percent below 1990 levels by 2030 and that several bills currently in the Legislature woudl further strengthen other climate requirements.  Disenhouse concluded,“The message from Governor Brown and the Legislature is clear: we need to act boldly today.”

After all the speakers had voiced their concerns, the commissioners voted unanimously in favor of having staff consider the points raised regarding changing La Mesa's Climate Action Plan.

The CAP hearing opened with Margaret Meade’s inspirational words: "Never doubt that a small group of thoughtful, committed citizens can change the world; indeed, it's the only thing that ever has.”  In closing, Commissioner Jim Newland praised the citizen speakers for their participation in the democratic process.

La Mesans, it is clear, will be watching to see that their new CAP does indeed pass muster. 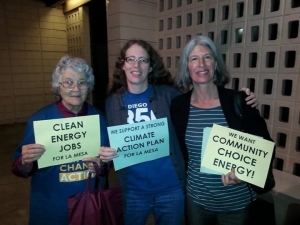