By Miriam Raftery
October 7, 2020 (La Mesa) – La Mesa residents voiced their concerns over the La Mesa Police Department response to the May 30 civil unrest and riot, also offering suggestions for future improvements in an online listening session held last night by Hillard Heintze, the firm hired by the city to conduct an independent investigation.
A poll of the 55 participants found a marked change in attitudes towards the LMPD before and after May 30.  While the vast majority said they were satisfied or somewhat satisfied with overall LMPD performance before May 30, nearly all voiced dissatisfaction with how the LMPD responded to the May 30 protests, with 55% saying they were not at all satisfied.
Organizers broke participants into several groups and asked them to discuss their observations about the response, recommendations for improvements, and what qualities they would like to see in a new police chief.
Topping the list of concerns was the lack of communication to the public as events became violent, culminating in the burning down of two banks and a historic building, as well as looting of dozens of local businesses.  Other than a mid-afternoon Nixel alert advising of a freeway shutdown, the city sent out no other messages until after 1 a.m. on May 31 to announce a 1:30 a.m. curfew.
Kelly Duffek, who lives near La Mesa’s downtown village, said her family left home and slept in a parking garage with their pets. She called the experience “terrifying.”
Denise Zellman said she spent much of the night on the phone with her mother, who lives in a senior care in the village and did not receive any notifications even as buildings went up in flames.
Messages from helicopters circling overhead could not be understood, some residents said.
ECM editor Miriam Raftery, who helped cover the breaking news during the riot, suggested the city create a chain of several individuals at City Hall and the Police Department who would be authorized to send alerts during any future emergency.
Some residents voiced frustration with police handling of the controversial arrest of Amaurie Johnson at a trolley stop, shortly after national protests had erupted over the killing of George Floyd by a white police officer in Minneapolis.  Johnson, who is black, was accused by an LMPD officer of assaulting the officer, but body camera footage failed to back up the officer’s allegations. The charges were dropped and the officer has since left the force.
Jeremy La Haye said he believed the officer was “not savvy” about current events, putting the city at risk with a stop widely characterized on social media as racial profiling.
La Haye and others also wanted answers as to why there seemed to be no police presence to protect most downtown businesses after looting began. “Police evaporated,”  he said.  He wanted to know where police were when buildings were set on fire.  He suggested police funds would be better spent on improved training for officers instead of militarization, noting that an armored vehicle was “not even used well” during a tense standoff at the police station as a tense standoff turned violent.
Raftery said that her public records requests to LMPD have failed to find any documentation of requests for mutual aid other than for the Sheriff, which had a presence, and for the National Guard, which denied  La Mesa’s request for help due to being deployed at civil unrest in Los Angeles. No records were provided to indicate any efforts to seek mutual aid from neighboring cities, tribes, Border Patrol or other law enforcement or fire agencies. (A records request to the Sheriff for any mutual aid requests sent by that agency has not been fulfilled; the Sheriff’s office indicates it will not do so until an independent review is completed.)  Raftery suggested the city have a process to ask for mutual aid and also to request that the county set up a system to assure no small city will be left without mutual aid resources in a future crisis. 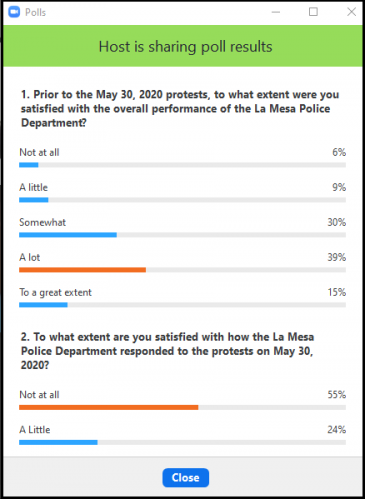 She also raised the issue of reporters struck by tear gas and pepper balls fired by law enforcement officers, which may have been LMPD or Sheriff.  She said ECM reporters were clearly identified as media and distanced as far as possible from protesters while taking photos.  She asked for assurances in the future to protect journalists’ First Amendment freedoms.  San Diego Union-Tribune reporter Karen Pearlman stated that she was also struck twice by teargas and had to leave at 6:30 p.m. as a result.
Several participants called on police to distance themselves from “vigilante” defender groups and wanted to see anyone who commits violence held accountable, whether rioters, looters, or vigilantes committing crimes.
Organizers summarized the discussions from each group.  Many participants want to see a new police chief who will hold officers accountable, work toward racial conciliation, support a police oversight board, and prioritize de-escalation as well as being transparent, working with the community, and providing better training to defuse racial tensions. Some suggested La Mesa consider hiring a person of color; one group wanted to see a woman as the next chief.
Some offered praise for programs such as Coffee with a Cop and want to see more police involvement with the community.
Chad McGinty, an organizer, praised participants for respecting other viewpoints and not “demonizing” others.  He called it “one of our most productive listening sessions” and said representatives of Hillard Heintze previously spent a week in La Mesa conducting interviews, an experience he called “traumatic.” McGinty promised that the after-action report will answer many of the questions raised, in an effort to provide clarity on the disturbing events.  The community’s feedback will also help the Hillard team draft recommendations to the La Mesa City Council for improving policing, including addressing racial tensions and responses to future incidents to better protect and inform residents and businesses in any future emergency.