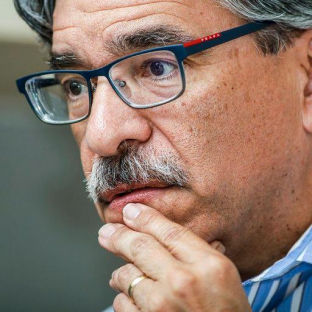 April 12, 2021 (San Diego) -- Steve Padilla, editor of the Los Angeles Times’ Column One feature, will share his favorite writing tips at the San Diego Press Club’s next “Write Better Right Now,” a one-hour, writing webinar from 6 to 7 p.m. Tuesday, April 20. The free webinar, held over the Zoom video-conferencing platform, is open to the public.

Drawing upon a variety of sources, ranging from Harry Potter to Shakespeare, Padilla will present a sentence-level workshop with practical tips on, among other things, anecdotes, endings, verbs and structure. The tricks Padilla will share are not designed for bad writers or beginners; rather, they’re the ones he uses every day and useful for dailies as well as long-form narratives.

Padilla joined the Times in 1987 as a police reporter but soon moved on to editing. He helped guide the Times’ Pulitzer Prize-winning coverage of a botched bank robbery in North Hollywood in 1997. He’s edited local news and, before overseeing Column One, was enterprise editor on the foreign-national desk. He also serves as a writing coach and devotes his Twitter feed (@StevePadilla2) to writing technique.

Also before joining the Times, Padilla was a reporter with The San Diego Union, a morning daily newspaper that merged in 1992 with the Evening Tribune, a San Diego afternoon daily newspaper. Padilla also has served as editor of Hispanic Link Weekly Report, a national newsletter on Latino affairs.

The April 20 webinar will be recorded and a web link will appear on the Press Club website for viewing at a later date. To register, visit www.sdpressclub.org. The “Write Better Right Now” webinar is part of an ongoing Press Club “Nuts and Bolts” series featuring veteran journalists sharing their favorite writing tips they’ve learned during their careers.