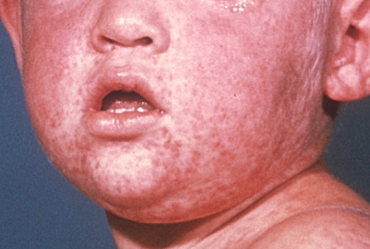 April 29, 2019 (Los Angeles) — A major outbreak of measles (or rubella) in Los Angeles and other U.S. cities could soon spread to San Diego, health officials warn. Here are fast facts you should know:

• 704 measles cases have been diagnosed in 22 states
• Worst outbreak since the disease was eradicated in U.S.in 2000
• 90% of unvaccinated people exposed to measles contract the disease
• Vaccine offers 97% protection
• Those born from 1957-1967 may lack immunity and need booster shot

Los Angeles County health officials ordered more than 1,000 students and staff at the University of California  and Cal State Los Angeles to stay home and self-quarantine due to measles exposure, the Los Angeles Times reported on Friday.

Travelers at Los Angeles International Airport (LAX) on April 1st may also have been exposed to the highly contagious disease.

Measles sickens 90% of those exposed who have not been vaccinated.  By contrast, the vaccine provides 97% protection.

Measles had been declared eradicated in the U.S. in 2000. But the disease reappeared after unvaccinated travelers became exposed overseas and brought the disease back to the U.S.

Before the measles vaccine became available, most children got the disease.  Each year, over 48,000 people were hospitalized. A thousand people a year suffered brain swelling from measles, and measles killed 400 to 500 people each year.

People born between 1957 and 1967 may not have full immunities, because initially only one shot was given.  Later it was found that a second booster shot was needed.  To be sure that you have immunities to measles, you can request a blood test from your doctor and ask for a booster shot if needed.

Federal health officials blame the current outbreak on parents refusing to vaccinate their children, partly due to a debunked study that falsely linked the vaccination to autism.

“Vaccines are safe and effective. They do not cause autism. That claim has been disproven,” said Dr. Wilma Wooten, San Diego County public health officer.

Measles begins with a high fever, rash and can cause serious respiratory symptoms or in rare cases, encephalitis (brain swelling) and death. It can be particularly dangerous for babies and young children.

The vast majority of cases currently are in unvaccinated people. Vaccination is also important to protect people who cannot get a measles vaccine including very young babies, people with certain immune disorder and those allergic to eggs.

The San Diego County Health and Human Services Agency has issued an alert this week asking the local medical community be on the lookout for potential measles cases and to report suspect measles cases to HHSA immediately.

If you suspect that you or a family member may have measles, health officials ask that you stay home and don’t go to a doctor’s office, clinic or hospital, where you may infect others. Instead, call your physician.

Parents can obtain the vaccines for their children through their regular medical provider. People with no medical insurance can get vaccinated at a County public health center for free. Local retail pharmacies also offer some vaccinations for a fee.

For more information on vaccines, call the Health and Human Services Agency Immunization Branch at (866) 358-2966, or visit sdiz.org.

What happened to the incubation periods at quarantine stations in Ellis Island? Why does coming here illegally exempt aliens from the laws on the books that make them inadmissible until we know they are not a threat? On Sunday, Aaron Hull, chief patrol agent of the El Paso sector, divulged to the public what we already suspected but most government officials assiduously covered up. The head of the second busiest illegal immigration corridor told Fox News’ Maria Bartiromo that Customs and Border Protection (CBP) is increasingly “caring for more and more sick people, because a lot of these aliens coming in are carrying contagious health conditions, things like chicken pox, scabies, tuberculosis, lice.”
Our country was founded on freedom of choice. Defending or becoming angry at Americans that make a personal and calculated choice about intrusion into their bodies, against their will, smashes personal rights. We fought too many battles defending our rights to let some - dictate to all.
As the article alluded to, these outbreaks are in this Century and the US historically eliminated and/or controlled them in the past.. 704 in 22 States does not represent much, when you compare it to the millions that walk the streets. The article also alluded to travelers bringing it back here. I disagree! We now have an uncounted 30+ million "illegal aliens" here and they are the carriers along with crime. The US Government is relocating "illegals" and we are paying their way as they spread whatever they carry. My grandparents and parents "did not" agree with vaccinations and argued they are intrusive into our body. I agree with that also, because in school I learned decades ago, that our auto immune system is supposed to take care of disease if we take care of ourselves. We have become so dependent that we believe whatever so called professionals claim as fact. I probably am older than most of these commenters and have not had Polio, Tuberculous, measles, flue etc. shots. As to the Government (you and I) forcing vaccinations, that in itself is a crime to force intrusive vaccines into those that do not want them. Government has been pushing parents around regarding this matter and has to stop. Sensationalizing. The pied piper gets great followings.

That I may have been exposed to measles while traveling through LAX over spring break.   I was vaccinated but just found out that for those in my birth year, there were some issues with the vaccines and I may not have full immunity. I called my doctor to request a booster shot due to the exposure, and learned that sadly because I currently am sick with bronchitis/borderline pneumonia I cannot have the vaccine. If everyone got them, nobody would be exposed and at risk.  It may be just 700 cases now but that will likely mushroom now that it's in big cities, not just isolated rural areas.

As for undocumented, most of the measles cases came in from Europe, not Mexico.  But  I would be all for requiring vaccinations of immigrants and asylum seekers entering the U.S., too, to prevent a once-defunct disease from spreading here again.

Measles is one thing. Though highly contagious most of the cases weren't deadly. But what if polio were to come back because of people skipping vaccinations?  It's currently obliterated in all but 3 nations on earth -- and those are ones were religious extremists are refusing to allow vaccinations.  I am old enough to remember people in iron lungs, or left paralyzed, if they survived at all.

Some did survived, some spent their lives in one. To see what these ppl had to live with,, like you said if they survived. If parents love their kids, they would get them vaccinated, if they don't and their kid contracts a disease that they refused to have their child get, they should be charge with cruelty to a child https://www.independent.co.uk/news/world/americas/polio-iron-lung-survivors-photos-lives-inside-ventilators-a8070881.html
Now that POTUS has come to his senses, I wonder if those who have been so vehemently opposed to vaccines, which can save lives and prevent crippling diseases, will see the light finally. Try to imagine a world without vaccines that most of us take for granted. Throughout history, there has been many heinous diseases bringing a scourge upon humans and animals alike. Thanks to vaccines, many of these have been eradicated. Unfortunately, some are making a comeback thanks in part to a few who don't believe they should be "forced" to participate in inoculation procedures to prevent sickness.