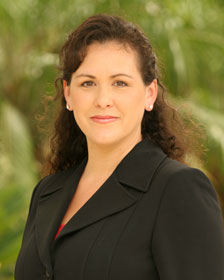 April 28, 2012 (La Mesa) – Labor Council Leader, Lorena Gonzalez, will be speaking at the La Mesa Foothills Democratic Club's May 2 General Meeting on labor's increasingly important role in the 2012 election. The program will be held at the La Mesa Community Center at 4975 Memorial Drive, La Mesa, from 7 to 8:30 pm.

She will discuss how Citizen's United has pushed labor into an ever more important role in many races across the country. The Citizen's United ruling opened the floodgates for unfettered and unaccountable corporate campaign-giving. As a result, labor and working people have been required to raise funds to counter the influence of the enormous funds corporations raise.

With a contentious San Diego mayoral race, several hotly-contested Congressional campaigns, as well as many other tight state and local contests, labor organizations will be important to voter turnout, candidate fund-raising, and media exposure.

Gonzalez will address San Diego Labor Council's strategy in the County and how it differs from previous years. Is money the element that determines who will be elected in November? Does Citizens United actually benefit labor campaign funding and reporting?

In January of 2008, Lorena Gonzalez became the Secretary-Treasurer and CEO for the San Diego and Imperial Counties Labor Council, AFL-CIO. The Labor Council is a coalition of 133 local unions that represent more than 192,000 working families in the region. Upon her election, Lorena became the first woman and first person of color to serve as head of the Labor Council since the organization’s inception in 1891.

Lorena was awarded the 2010 Labor Leader of the Year Award by both the John S. Lyons Foundation and the Interfaith Committee for Worker Justice, the UFCW Local 135 Unity Award, Empower San Diego's Progressive Champion Award and the Mayor George Moscone Civil Rights Award.