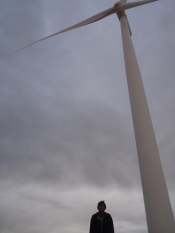 May 31, 2014 (Ocotillo) – Last month, our article, “Was it fraud?”  raised serious questions over whether Pattern Energy exaggerated wind capacity factor claims to pocket federal subsidies for its Ocotillo Wind Energy Facility.  That story revealed that in calendar year 2013, the facility produced less than half  of the 34% capacity factor promised by the developer.

Now the results are in for the first quarter of 2014, with equally dismal results.  From January through March, the Ocotillo wind site produced only 17.97% capacity factor. That includes March, traditionally one of the windiest months of the year in the Ocotillo region.

Specifically, the wind production figures were:

This adds so much insult to injury. If, at the very least, these abominations made as much power as their sales-advocates claim, there might be solid arguments for them.