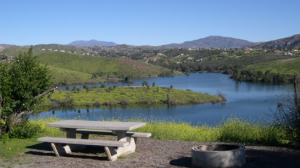 June 18, 2015 (La Mesa) – After hearing testimony from a Boy Scout leader and other users of the Lake Jennings Campground who pleaded to keep it open, the Helix Water Board voted to delay action on possible closure for one year.  But the long-term future of the campground is not yet secure, despite recent financial gains.

Bob McDowell, a Boy Scout leader, pointed out that the campground costs just 12 cents a month per ratepayer to run.  He said that hundreds of children want to camp at the lake.  It would be a “travesty to take that away from these kids,” he told the Board.

Dan Northcutt grew up near Lake Jennings and attributes the love of nature he developed there as a child to his commitment today to adopting open space as part of a land use group, also helping to do cleanup.

Bob Harness came from Point Loma to testify. “This campground blows away all the others,” he said. “Please don’t close this…our grandchildren would miss out.” Closing the campground would be “unacceptable and inherently wrong,” he said, then asked, “If you close it, what’s next? Developers?”

Another speaker noted that the grant that established the reservoir over 45 years ago was intended “for the good of the people” by providing a place for people to enjoy nature close to their homes. “Helix got its dam, but los sight of why,” he told the board. “It’s a function of the board to provide for the good of the people.”  Nothing that the board has made progress toward breaking even, he added, “to close the campground now would be to squander this. I have no problem contributing 12 cents a month to keep this campground going, and 15 cents a month for the water conservation garden.” 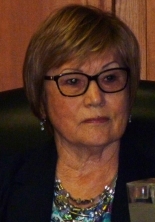 Board President De Ana Verbeke (photo, right) opened board discussion by stating, “I’ve always said it’s a matter of the dollars and sense,” but praised the committee headed by director Joel Scalzitti for its progress toward attaining profitability or breaking even.

Then Verbeke disclosed that Supervisor Dianne Jacob has sent a letter stating she will ask the County’s Parks and Recreation Department to look at the potential for a partnership role with the County and Helix to keep the campground open.

Verbeke then motioned to ask the board to approving giving the campground the opportunity to become self sustaining, and keep it open through fiscal year 2015-16. She also proposed budgeting $20,000 for a marketing plan, eliminating the committee and assigning Scalzitti to be a liaison, with a review planned for March 2015. Scalzitti seconded the motion.

Director Kathleen Coates-Hedberg called it a “great campground.”  She has noted that a recent increase in efforts by the board to get publicity out has increased attendance, a trend she hopes will continue.

But director John Linden had a different view. “Our obligation is to our ratepayers who pay for our facilities…99% of our customers do not use the campground.” He said a consultant who has done work for Disneyland had concluded the campground needs $12 to  $15 million in improvements –and that he opposes any expenditure for advertising/marketing until those upgrades are done, since he thinks people won’t come back if they are disappointed in facilities. But he also opposes spending money on the upgrades.

“We’re not in the entertainment business. We’re not in the camping business,” he concluded, adding that with water rates rising amid a drought, the district should focus on providing a safe, dependable water supply as its goal. He added that he would not oppose Helix keeping the campground if the cities of El Cajon, La Mesa, Lemon Grove and/or the County would buy into paying for it.

Director Chuck Muse also voiced concerns but said he would reluctantly support Verbeke’s motion.  He recalled that Helix asked the County to take over the campground previously, in 2013 when Helix took back the lake from the city after a 40-year contract expired.  “Where were they (the county) a few years ago?” he asked.   Muse said he believes if at least $2 million is not spent on upgrades, it’s just postponing the inevitable.

Ultimately the board voted 5-0 for Verbeke’s motion to keep the campground open for a year.

Afterwards, Scalzitti told East County Magazine he was very pleased with the vote, particularly the $20,000 allocated for marketing “for the first time.” Strides are being made, such as getting a state approval for kayaks on the lake just last month. Already a kayaking club has shown interest in holding group activities at the lake, he disclosed.

Scalzitti recalled that naysayers once predicted the campground could never be profitable,  yet the debt has dropped from $200,000 to $24,000 in the past year. He voiced confidence that the new marketing dollars will enable profitability to be achieved in the near future.

But the public’s voices clearly had an influence on the board, helping assure that the campground will remain open long enough to give the marketing budget an opportunity to save this increasingly popular destination for local campers.

unlike football stadiums, so since the new Chargers stadium appears to be dead perhaps they can free up some money for useful and profitable campgrounds to improve them and reduce prices to make them even more useful.