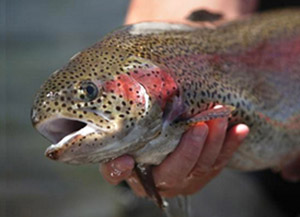 October 22, 2013 (Lake Jennings) – Ten-year-old Doug Utz stood with a smile beaming across his face and his arms spread the length of a nine-pound Rainbow trout.  The young fisherman was presenting his catch for a photo to commit the moment to history.

That was many years ago, however, and such catches have since been impossible at Lake Jennings in San Diego’s East County.  Rangers instead have been stocking higher numbers of smaller trout to help anglers bag their limits of five each.

According to Head Ranger David Acevedo, that philosophy and practice are coming to an end.  For this trout season, beginning Nov. 1, Acevedo said up to 3,000 pounds of trout will be stocked just before opening day with weekly 1,000-pound plantings thereafter.

Average trout size in the deliveries will rise from a-pound-and-a-quarter to two pounds.

The big change, however, is that 10 percent of the plants will be “trophy” trout, up to 12 pounds each.

“We’re trying to give the anglers what many of them have been asking for,” Acevedo said.  “Lately, when people have called on the phone and I’ve told them we’re getting ready to stock bigger fish, they’ve gotten very excited.”

Acknowledging that not all fishermen are dedicated to trout but that nearly all anglers enjoy battling larger fish, Acevedo had some tips to help the uninitiated.

“A lot of trout fishing is done with light gear, Acevedo said.  “To catch an eight-pound trout on light gear, you really have to finesse the fish or you’re going to lose him.  They’ll snap four- or six-pound-test line likes it’s nothing.

“If someone asks me ‘what’s the best way to catch a trout?’ I would tell him to get into a boat and troll. If you do that, you’re probably going to be catching fish in the first 30 minutes.”

Acevedo said that fishing from the lake’s banks should get pretty good, too, when the recently stocked Wipers (a hybrid of White and Striped Bass) gain control of the deep.

“The Wipers will narrow down the areas where the trout will go,” Acevedo said. “The Wipers will be chasing shad out in the open water and taking over that territory.  We think the trout will move from there and concentrate on working the shorelines, getting closer in, and becoming more accessible to shore anglers.”

Suggesting bait for beginners, Acevedo noted that many experienced anglers use a “trout cocktail” that includes putting a night crawler worm on the hook, adding a dough ball on the head tip, and injecting some air into the worm so it will be forced to float up from the bottom a few feet above a sinker weight on the line.  For trolling, Acevedo said a rubber Power Worm would be the best bet.

Not only will there be larger fish to reward patient anglers this season, lake officials will offer prizes for catching “tagged” trout.  Acevedo said actually tagging fish will be unnecessary since additionally stocked Emerald trout’s colorful appearance will be a suitable marking.  Prizes have yet to be determined.

Lake Jennings gets its fish, “Sierra Bows,” from Mt. Lassen Trout Farm in Red Bluff, a town in Northern California.

“Those are pretty aggressive fish,” Acevedo said.  “They have a reputation for being a good fighting fish.  And our changing to larger fish—even the average trout at a half-pound bigger—is going to make a significant difference.”

In a testimonial published on the trout farm’s website, Timothy Ports of Ports Seafood in San Francisco said that Mt. Lassen trout are as close to wild trout as you can find.

“The flavor is clean and the freshness is always impeccable,” he said.  “This is truly a handcrafted, artisan fish that changed my perception of farm-raised trout."

Some widely told tales insist that hooking the fish yourself can enhance the taste significantly.

“If you fought it and caught it, that fish will be a feast,” Acevedo said.  “You’ll enjoy every bit of it.”

“We were trolling,” he said.  “It was my second or third time trout fishing.  Suddenly there was tension on my line and I freaked out a bit.  I didn’t see how big it was until we got him into the boat.

“It was pretty exciting.  That catch probably made a lot of other guys jealous.  I still talk about that trout whenever anyone mentions fishing.”

Utz said he is eager to take another shot at a hefty trout in Lake Jennings.

“Opening day I plan to be out there trying to get another big one.”