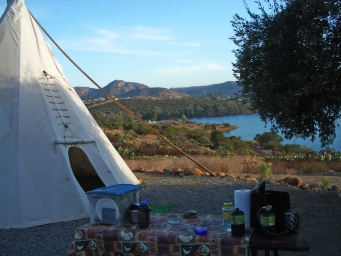 December 12, 2017 (Lakeside, CA) -- When we traveled to Utah last year, we checked out a resort that had tipis and got to thinking this might be something we’d like to try.

So, when we discovered that Lake Jennings offers them at its campground in Lakeside, we arranged to spend a night in one.

Getting to the Lakeside campground from our Santee abode took us about 15 minutes to go a dozen miles. The 97-site campground that was formerly operated by the county is under the auspices of Helix Water District, which owns and operates the reservoir that is Lake Jennings. 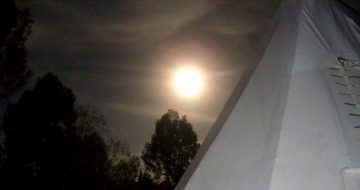 Despite its location in a developed urban setting, the views from our site were outstanding, and made even more enthralling because of the super moon that blessed our evening in early December. It was much bigger and brighter than any full moon we had witnessed in a long time.

The tipi was one of only five at the campground, all situated along Tipi Trail. They’ve been a hit since the campground erected them last year, said Kira Haley, lake recreation manager.

“We’re generally sold out every weekend from March through Thanksgiving weekend,” Haley said. “We get all types of folks renting them--- groups, families, young people in their 20s, groups celebrating a birthday party.”

Made of pine poles and canvas, the tipis are much larger than I envisioned, about 27 feet tall and 20 feet in diameter and can easily accommodate 10 adults, but are limited to only six persons at each structure. Cost is $75 per night on the weekends, and $65 during the week. Each site has a water outlet, a picnic table, and a fire ring. 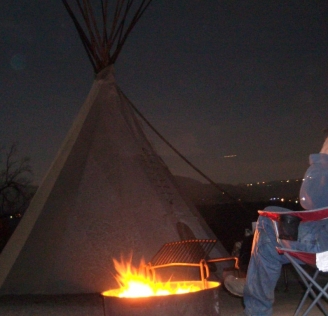 Once we unloaded our sleeping bags and food, one of the big advantages of tipi camping became evident----no need to put up our tent, leaving us more time to explore.

Down at the lake, anglers on land and on boats were casting their lines, hoping to catch some trout. On this weekend, the lake was open to fish until 10 p.m., but from Memorial Day to Labor Day on weekends, fishing on the lake is permitted until midnight, Haley told us.

Several types of water craft are available for rent at the marina next to the campground-- motorboats, rowboats, paddle boats (propelled by your feet), and kayaks. The latter were introduced a year ago and go for $10 an hour, or $30 for four hours.

We considered the kayak but it was getting late, so we decided to hike part of the lake’s five-mile loop trail, which is listed as moderate/ difficult on their maps but is mostly flat.

As the sun was setting, we prepared our meal: chili mix of dried beans and other ingredients plus ground beef.

Camping close to home lets you get a feel for what you’ll need on a longer trip, and what not to forget. We should have taken some green pepper and cayenne along with the onion, and some shredded cheese to top it off. 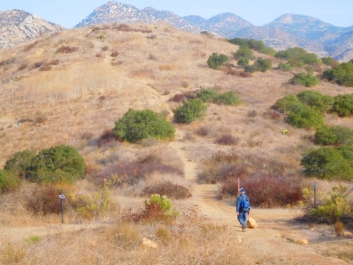 We did remember coffee for breakfast, but forgot everything else. Luckily, we brought extra protein bars.

The sites aren’t too close to each other so there’s a decent level of privacy, but you can still hear louder groups if you happen to be next to them. That was the case with our neighbors who were apparently celebrating a birthday but they calmed down after the required quiet hours from 9 pm to 7 a.m.

Before retiring to our cavernous tipi, we took a stroll around the campground to see parts we missed and noticed a children’s playground. The campground has some organized activities for kids such as a scavenger hunt as well as outdoor games like ladder golf, horseshoes, ping pong, and corn hole toss.

The night we visited, camp hosts were offering free chocolate, marshmallow, and graham crackers for anyone who desired s’mores. There’s also free Wi-Fi but I couldn’t access it when I tried so getting the scores on the day’s college games wasn’t possible. I was told some areas had better reception.

Sleeping on the ground isn’t exactly comfortable no matter how exotic the surroundings so don’t forget to bring an air mattress. There’s also plenty of space for cots. During the night, the sounds from critters out on their nocturnal excursions woke my girlfriend but didn’t disturb me. Among the regular denizens of this area are mule deer, raccoons, coyotes, and wide variety of birds and waterfowl. 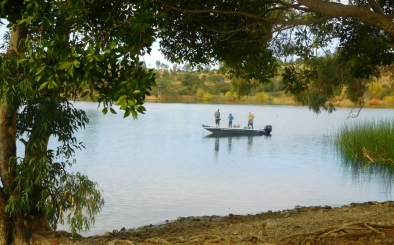 On our hike the next day, we spotted an American bald eagle, which flew to a tree top and rested for a good while as it gazed down on the lake looking for its next meal. Haley said whenever the lake is restocked with trout, “the eagles are right around the corner.”

The hike the next day on the county’s Historic Flume Trail wasn’t that long, with the map telling us the trail to the El Monte pumping station was just over two-thirds of a mile. Yet it was mostly downhill, meaning we’d have to return via the steep, switch-backed hill. Instead, we opted to go east on the trail towards El Monte Park, which we were told was seven miles away. At some point, perhaps a quarter mile later, a sign notified us the trail ended, but there’s clearly more trail to go. That presumably is private property. So, we turned around and explored part of the lake loop trail we didn’t traverse Saturday.

On the way, we ran into some visitors from Minnesota who were staying at Santee Lakes but were impressed with what they saw at Lake Jennings. “We really like this place,” said the woman with a wide-brimmed hat and copious amounts of sunscreen on her face. “I wonder if it’s booked. Maybe we’ll move our trailer over here.”

And maybe next time, we’ll make sure we got all our supplies and stay for a full weekend.

Oh, this looks like a fun and unique way to camp!