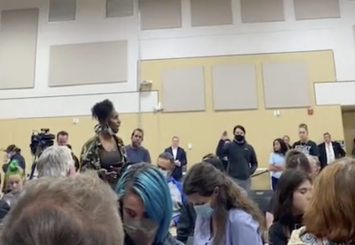 May 8, 2022 (Lakeside) — Lakeside residents concerned with the Sheriff’s handling of the recent hate crime stabbing investigation still await clarity, while the 16 year-old boy charged in the attack on a teen girl has his next court appearance on June 6. He has pleaded not guilty on attempted murder and hate crime charges. His 15 year-old girlfriend was also recently rearrested for further involvement in the attack than previously thought.

The boy’s father, who was present for the attack, has not been arrested. The District Attorney’s office has said the investigation is ongoing.

The stabbing, which took place on April 16 around 11 p.m. at the Woodglen Apartments on Mapleview Street in Lakeside, was related to previous verbal altercations between the parties, who live near each other. Racial hate speech was present during these verbal incidents as well as during the physically violent escalation.

According to Cindy Cipriani, Senior Counsel at the Office of the US Attorney, hate crimes went up 77% last year in San Diego. According to Sheriff’s Department Lieutenant Shawn Wray, four hate crimes were investigated in Lakeside in 2019, and four in 2020. The recent stabbing is the first being investigated in Lakeside in 2022.

The victim, a 16 year-old Black girl, is facing multiple stab wounds in her back and damage to her lungs. She spent 36 hours in the hospital following the attack. Members of her family were with her at the time of the attack and faced the violence as well.

Names of the suspects and victim have not been released, because they are minors.

On April 19, the Lakeside Sheriff’s Substation opened the community center’s doors for a town hall event to create space for dialogue about the incident. The event was live-streamed on Instagram by East County BIPOC, whose bio states they are “a unified group of women of color born and raised in East County San Diego.” 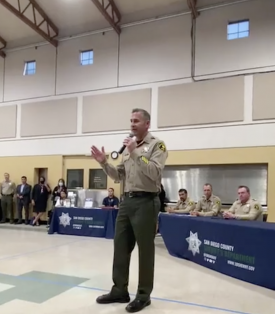 Over 100 people filled the room, many there to address what they have experienced as a lack of accountability from law enforcement in Lakeside.

“Word on the street is that there wasn’t enough care given from the beginning, nor enough respect shown, and there wasn’t a sense of urgency,” said one attendee, describing the way the Sheriff’s department handled the stabbing at first.

Others voiced concern over the victim’s medical treatment — that her injuries were significant, and a day and a half in the hospital was not enough care. One individual claimed the victim’s stab wounds were not even stitched up, and remained open for infection as she was sent home to the care of her mother.

Many present at the meeting also worried about the premeditation of the attack, and any connections to white supremacist groups in East County.

“The way it feels right now,” said another attendee later in the meeting, “is that a Black person could be hung in Lakeside, lynched from a tree, and there would be no accountability.”

Lt. Wray, who became the commander of the Lakeside substation this spring, fielded these questions and comments, and denied that the Sheriff’s Department was non-urgent and unaccountable. He facilitated the meeting with assistance from Cindy Weinreb, the chief of Juvenile cases at the District Attorney’s office, and cited working with the victim witness program and the apartment complex to direct resources towards the victim and her family.

He also said that his staff monitors and addresses white supremacists. Yet those attending the town hall called for more proactive action, from more frequent town halls, to an investigation into the Lakeside Substation. They claimed the stabbing would have been far worse if the circumstances were any different. If the victim had been alone, for instance, many agreed they would be dealing with a murder.

Also frequently voiced at the town hall was concern over the boy’s father. While avoiding going into details of the case, Lt. Wray and DA representative Weinreb said that if he was ruled a bystander, separate laws would apply to him. However, those in attendance felt he should be treated not as a bystander, but as an accomplice in the attack.

Activist Tasha Williamson noted how people of color who are present for crimes being committed are treated very differently.

“They are all locked up and in prison right now,” she said. “If you can’t do it now, you need to free those people that you locked up.”

On April 23 at 6 p.m., an anti-racism rally was held in Lakeside to further address the East County issues that encircle the recent stabbing.

“There has been a long history of racism in East County but it shouldn't take one of our own being hurt for this to be taken seriously,” wrote East County BIPOC on Instagram in advance of the rally. “We all deserve more justice than we have received. Let's stand together in solidarity against hate and show them this will no longer be tolerated on our watch.”

For information on how to support racial justice from privileged positions, visit surjsd.com, a San Diego chapter of the national group Showing Up for Racial Justice.