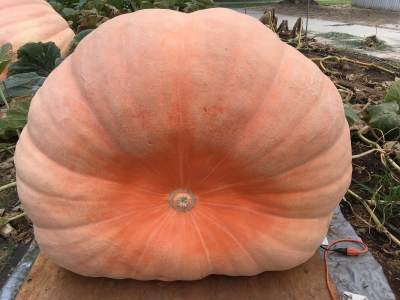 October 1, 2020 (Lakeside) – The Fredricks family in Lakeside is once again vying to earn the title of biggest pumpkin grown in San Diego County this year—and maybe ever.

“We grew two giant pumpkins this year and one of them might be a new record estimated at 1,600  pounds! My son grew the other one that is estimated to be 900 pounds.,” says Sarah Fredricks, who sent in photos of the mammoth gourds.

They’ll be hauling the great pumpkins to a weigh-off on October 3rd.

Last year, the family grew a 1,533 pound pumpkin that missed the all-time Southern California record by just two pounds, taking second place at the Pumpkin Competition weigh-off at the Irvine Railroad Park.  (The biggest statewide was entered by Ruben Frias of Napa, who won with a 1,758 pound pumpkin.)

Even that, however, is far from the biggest pumpkins ever grown.  As of last year, the world record belongs to Steve Geddes of New Hampshire, who grew a 2,307 pound pumpkin, according to the website BigPumpkins.cot at http://www.bigpumpkins.com/WeighoffResultsGPC.aspx?c=P&y=2018.

In an interview last year with East County Magazine, Jim Fredricks said, “I have grown giant pumpkins on and off since 2001.,” He grew the giant gourd along with his wife, Sarah, and their boys, Andrew and Joshua, who were 5 and 8 at the time.

Asked the secret to his success, he replies, “There are no secrets to growing and I readily share what I know with others. Hard work, lots of work in the patch every day, disease control, lots of water, the right seeds, good soil and a little luck.”

The term “Great Pumpkin” was popularized by Charles Shultz, author of the popular “Peanuts” cartoon strip in which Charlie Brown waited each Halloween for the Great Pumpkin to appear. Appropriately, the Fredricks family posed with their prized pumpkin wearing Charlie Brown T-shirts. 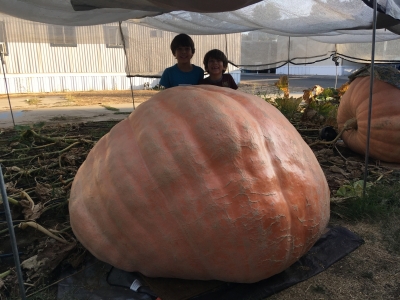 So how do you move a pumpkin that weighs over three-quarters of a ton?

“Loading and transporting is not easy!” Fredricks says. “We craned our fruit into the back of a U-haul trailer for the ride up to Irvine for the weigh off.”

After last year’s entry was displayed in Irvine and later at Shadow Mountain Church, it was cut up and seeds retrieved for future crops of potential prize-winning pumpkins.