The downstairs portion of the building will house the fire trucks, firemen, kitchen, bunk rooms and wash room facilities. The trucks and fireman are coming from the Eucalyptus Hills station on Valle Vista Road. The upstairs will house the administration offices which will come over from the Parkside Avenue Administration Building.

As a symbol of the end of an era for Station #2 the big red truck pulled up with the firemen on board, they unfurled the American flag and hoisted it up the new pole and the El Capitan High School Pep Band played the National Anthem. Pastor Llyod Dailey gave an invocation.
Fire Chief Andy Parr had some interesting remarks to make.  "We are here to meet the needs of the public, this building will replace two aging facilities," he said. "The Parkside building was finished in 1990 and the Eucalyptus Hills Fire Station was built in 1960.  In the old days they built fire stations on the hill because the trucks couldn't go fast up hill. Equipment has improved and now we are moving to the banks of the San Diego River on Lakeside Avenue."
Parr stated that this idea of a new station came up during the Cedar Fire of 2003 when the Fire Chiefs met here with sirens screaming by and wind blowing. They wished they had a fire station nearby to pore over the plans and a place for firefighters to bed down, shower and eat--a central meeting place.  Afterwards there was gentle pushing from Dianne Jacob to bring fire agencies together and cooperate with each other.
Second District Supervisor Dianne Jacob who was a guest speaker, said that she couldn't think of a better Christmas present for Lakeside than this Fire Station. She added that in 1989 the Upper San Diego River Improvement Project (USDRIP) sputtered along.  The County revived the State Redevelopment Agency, which meant that $85 million of taxes stayed in Lakeside. Redevelopment funds were used to build this station.
Jacob honored past Fire Board President and Planning Group Chairman Rick Smith, who sadly had passed away before he could see the finished station. He had worked hard for many years to get funding for the $15.2 million building.  "This building will be his legacy" she said. A meeting room will be named to honor Smith. 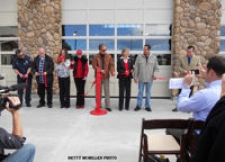 The ribbon cutting ceremonies were led by Jacob and included Nick Johnson, Pete Liebig, Susan Conniry, Jon Lorenz, Jim Bingham, Cindy Smith, Ken Coyle, Eric Gibson, and Eric Stamm.
Then there was a self guided tour of the facilities for everyone to see. There was even a map to help direct them through the huge building, but many firefighters were on hand to proudly tell about their new building.  An open house for the general public was held on on Saturday, December 17.
For more info on the new Lakeside Fire Station Click here- http://www.lakesidefire.net/