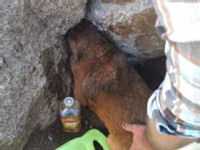 February 17, 2012 (Lakeside) – Toby, a Shiba Inu dog belonging to Lakeside resident Tim Ellis and his wife is free, thanks to the efforts of Lakeside firefighters.  While chasing a squirrel, the dog got its head caught between rocks in an artificial waterfall.

“The vet tech came out and sedated him to calm him down. His neck was swollen from his efforts so he was stuck pretty tight,” Ellis said, according to ECM news partner 10 News.  The couple first tried disassembling the waterfall and used lubricant to try and free the panicked animal, before calling firefighters to finish the job.

Toby was reportedly resting comfortably overnight at the vet, where he was taken for observation.