February 4, 2012 (Lakeside)--This past weekend, a local East County volleyball club, Lakeside Starlings, competed in Anaheim at the second of three qualifying tournaments. The day started off slow with three losses but ended well with a win against the Christian club, Pursuit. 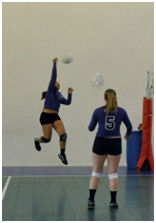 Lakeside Starlings consists of girls from high schools all over East County, which include Steele Canyon, El Capitan, Santana and Granite Hills. They’ve come a long way to their first victory. With only one senior and most of the girls who hadn’t made their high school team, Lakeside Starlings was lacking togetherness and experience.  But through trial and error, the Starlings came out of the tournament victorious with their first win.

Leading the team with aces was the outside hitter,  El Capitan High School Junior Shay Bryant,  who bestowed the team with nine aces.  At the top of the food chain was the hard hitting middle, a junior at Santana, Jackie Londoño, who racked up eleven kills.
In defense the team’s only senior and setter, Emma Cajthaml  (author of this story), led 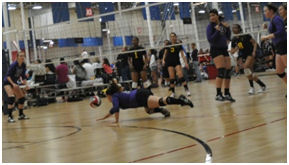 the team in serve receive with an eighty-five percent success rate while  Santana junior and libero (a defensive specialist position in indoor volleyball), Janice Lockwood, led the team in digs with twenty-seven total digs and an average of three digs per game.
Steele Canyon’s very own Katie Minshew rose to the occasion with twenty-five assists and is well on her way of becoming a phenomenal setter. 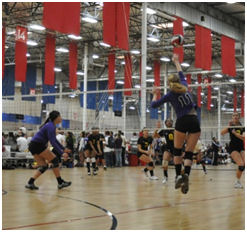 Lakeside Starlings is stacked with ample amounts of talent and with more guidance from their coach Mary Beiler, woman’s volleyball coach at El Capitan High, the team is well on their way to more victories on February 11th and will be taking the Las Vegas festival by storm on President’s day weekend with their non-returnable serves, hard hits and smart plays.