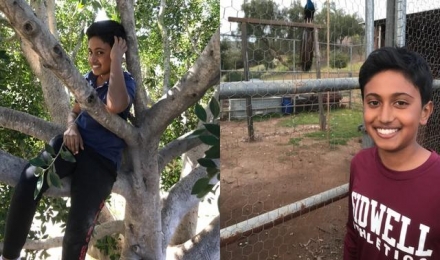 By Miriam Raftery
April 24, 2019 (Lakeside) – An 11-year-old boy whose father lives in Lakeside was among over 350 victims killed on Easter Sunday in bombings of churches and hotels in Sri Lanka. Another 500 were injured in the terrorist attacks.

Kieran Shafritz de Zoysa was studying at an international school in Sri Lanka, his mother’s homeland, the San Diego Union-Tribune reports. The only child of Lakeside resident Alexander Arrow, Kieran had visited his father during the first two weeks of April over spring break. He was slated to return in June.

Arrow remembered Kieran as “the perfect son.”  He laments, “Everything triggers the memory of him.”
The elite school he attended was the same one where Sasha and Malia Obama studied, as well as Chelsea Clinton. Kieran, a straight A student, had a life goal was to become a neuroscientist seeking a cure for Alzheimer’s, but his dream was cut short when a suicide bomber blew up the Cinnamon Grand Hotel in Colombo, Sri Lanka.
Kieran’s mother and grandmother were not injured, but shrapnel tore through the boy who perished despite a doctor trying valiantly to massage his heart for an hour and a half.
The Islamic State or ISIS, has claimed credit for the deadly bombings, which authorities say were carried out by nine bombers, all members of a local extremist group from Sri Lanka.  Investigators have not yet determined whether in fact that terrorists were tied to ISIS, but warns that the threat of future attacks is a serious concern.