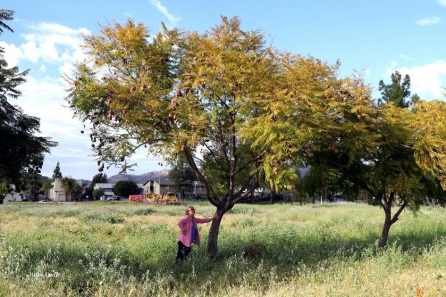 Photo, left by Billy Ortiz: historian Betty McMillan stands beneath the shade of a jacaranda tree, one of 22 she is fighting to save.

Updated with quotes from the County library director.

April 5, 2021 (Lakeside) – On April 9, San Diego County is slated to cut down nearly two dozen jacaranda trees to make way for a new county library—trees that the county claims are growing in a utility easement.  But Lakeside’s historian Betty McMillen disputes that claim – and is fighting to save the trees, which hold special significance as part of a “mile of trees” planted in Lakeside -- trees planted to replace an earlier canopy of trees felled by bulldozers. 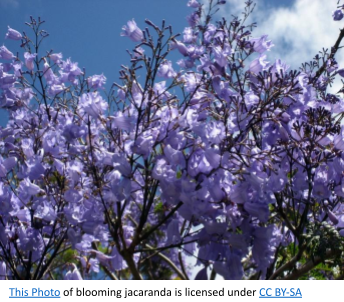 In a video interview with fellow Lakeside Historical Society member Billy Ortiz, McMIllen says before planting 24 jacaranda trees a decade ago, she obtained permission from the then-property owner. “The Garden Club paid for the trees,” she recalled, adding that Americorps volunteers planted them with the support of Supervisor Dianne Jacob, who “cleared the red tape for us” to plant the trees in order to not only beautify Lakeside, but address climate change and create cool, shady areas for the community.

Numerous community groups have helped care for the trees through the years, says McMillen, who wants to save as many of the trees as possible.

Ortiz has also been involved in working to preserve the trees. When gophers devastated some of the newly planted jacarandas, Ortiz and another volunteer dug up all of the trees, put cages around and replanted them. Twenty-two survived.

While the Lakeside residents are pleased that a new library is planned, Ortiz says, “The county has refused to incorporate the trees into the landscape. They say it's because the trees are in a utility easement but Betty McMillen is calling foul and has contacted District 2 supervisor Joel Anderson. Joel Anderson is interested in finding a solution,” says Ortiz, “but what he is suggesting is not what Lakeside wants. Lakeside wants the trees to stay right where they are, Mr. Anderson's idea is to transplant them.”

“Supervisor Anderson is aware of the issue of the trees in Lakeside and our office has discussed it directly with San Diego County Library staff.  This issue has been known for a while and it is our understanding that County staff has reached out to the community to address these concerns on several occasions.  It is also our understanding that the contractor for the new Lakeside Library project has proposed a landscape design with many new mature trees that will be planted beyond the 50 ft. easement.  They are also planning to plant a dedication tree with a plaque recognizing Flossie Beadle, an historical figure from the mid 1800’s who headed the original effort to preserve Lakeside’s trees.”

Harrison adds, “That being said, one idea our office has discussed with the Lakeside Chamber of Commerce is possibly implementing an Adopt-A-Tree program that will allow people in the community to repurpose any qualified existing trees that are not too large to their homes or other appropriate places in the community. This is just an idea, however, and still needs to be  discussed in more detail to determine if it is at all feasible, it may not be.”

Ortiz cites a second concern. “The other issue is that the county failed to include the Lakeside community for input during the planning phase of the landscape and the building. Most projects have to go through local planning groups, of which Lakeside has two; it never came through our planning groups.”

Ortiz says the county refused to answer questions about the trees until about two weeks ago, when the plans were revealed.  “Now it has come down to the wire, grading begins on April's 5, 2021 and trees are slated to be chopped down on April 9th 2021,” Ortiz adds.

Migell Acosta, director of the San Diego County Library, says grading began today for the new library and acknowledges that the jacaranda trees at the front edge of the property along Woodside Avenue” will have to be removed by April 9, 2021 because most were unfortunately planted by volunteers within a 50 foot easement established by the city of San Diego to protect existing water lines that connect the property to the main water service.  Others interfere with the construction of the parking lot and number of spaces we could accommodate for the library and construction of the building itself.”

Acosta says the contractor’s new landscaping plans include new mature trees that will be planted beyond the easement “because moving the existing Jacarandas is not a cost-effective option.”

He says outreach to the community began with a meeting March 20, 2020, over a year ago with Terry Burke-Eiserling of The Friends of the Lakeside Library and her committee created in coordination with former County Supervisor Dianne Jacob. That committee included Kathy Kassel with the Lakeside Chamber and Janice Shackelford with the Lakeside Design Review Board.

A second meeting July 27, 2020 was attended by at least 50 community members, Acosta adds. “Terry Burke-Eiserling posted it through her extensive 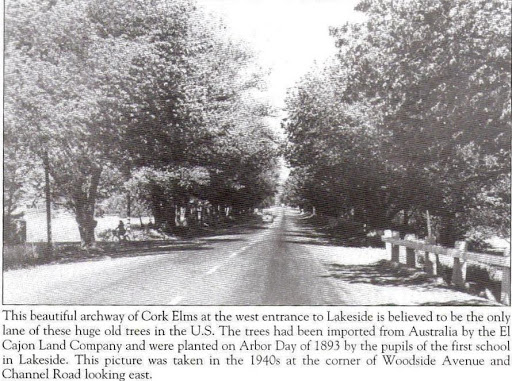 Lakeside network and various local social media groups.  The design plan was presented at both virtual meetings and attendees left comments or questions in chat which were responded to during the meeting. The friends of the Lakeside Library was also involved in a Source Selection Committee to help award the winning design”

On March 12, 2021 a meeting was with Terry Burke-Eiserling, president of the Friends of the Lakeside Library;  Betty McMillen, and her colleagues.“The County explained why the trees couldn’t stay and offered a right of entry to anybody willing to take the trees – there have been no takers to date, and Lakeside volunteers tried 8 different places,” Acosta says. “There was also an onsite meeting with County staff and Willian Ortiz and Betty McMillen to discuss the dedication tree” which will honor both McMillen and Flossie Beadle’s efforts to beautify the community.

The estimate the County Department of General Services received for relocation is $8,500 to 9,500  for each tree, and that doesn’t include a cost to replant them, only to excavate, box and transport them, and replace/prepare the soil for the new trees.  The new replacement trees selected in the design plan are Palo Verde. They were selected because they are native to the area and are not as messy as the Jacarandas on sidewalks and pavement.

On Arbor Day in 1893, school children planted around 50 Cork Elm trees to shade Woodside Avenue. The trees grew to form a shady canopy across the entire street. 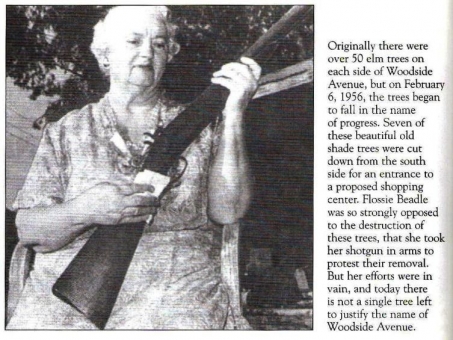 But in 1956, some trees were cut down for the entry to a proposed shopping center. Flossie Beadle was so staunchly opposed that she took up a shotgun in front of a bulldozer in protest, fighting to save the trees. She lost that battle, and today not a single Cork Elm tree remains.

“We were trying to replicate that idea of having the shade trees on Woodside,” McMillan states in the video interview.

McMillen wants Anderson to “do what Dianne Jacob did” and take a stand to protect the trees.  Besides adding beauty when abloom with lavender blossoms, the trees have another purpose.

“Lakeside is a hot place in the summer,” she concludes. “The more trees we have, the cooler it will be.”